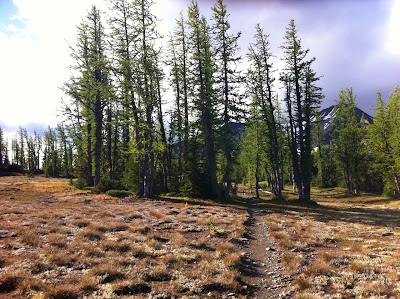 the snows have held off long enough for my friend kris and i to embark on an alpine mountain biking excursion. the trail we chose linked 2 peaks and meandered down a long ridge between them. 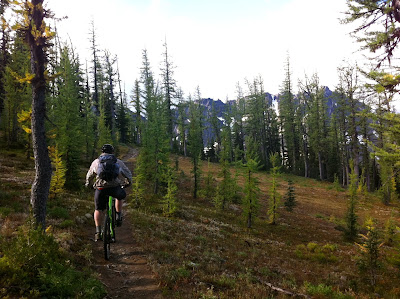 the initial climb took us about 3 hours. we started up the flank of the mountain in dense new growth and then broke out into this beautiful open alpine forest working on its third millenium. 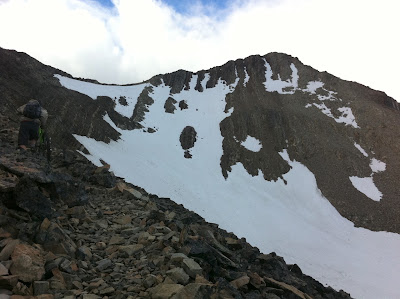 from there the trail transitioned to rough scree and we did some serious bike a neering. the wind was howling over this saddle and a bike slung over your shoulder acts surprisingly like a sail in those situations. 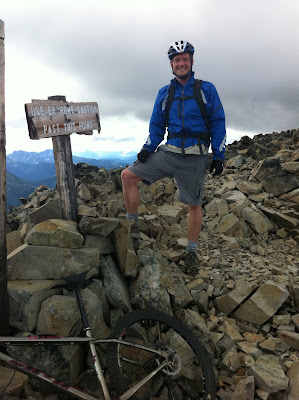 from the saddle we dropped our bikes and scurried up to the peak and back. after that we just had to clear a bit more scree before the next several hours were filled with this: 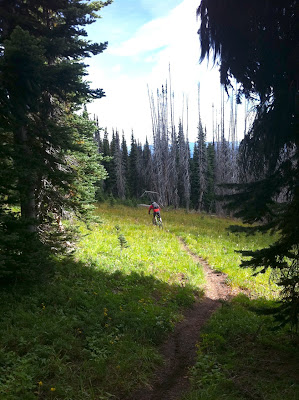 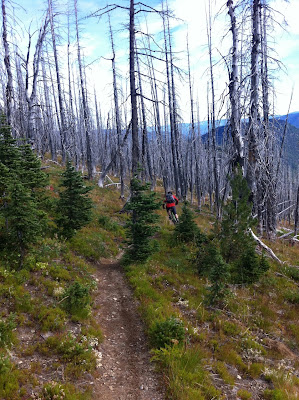 then rolling cross country trails slowly giving up elevation as we descended into a backcountry river valley. our initial plan was to visit the second peak and return directly to the car, but on the trail we encountered an old wooden map that showed another route down around the backside of the mountain instead. feeling adventurous, and not ready to finish our day, we opted to add another loop to the journey. 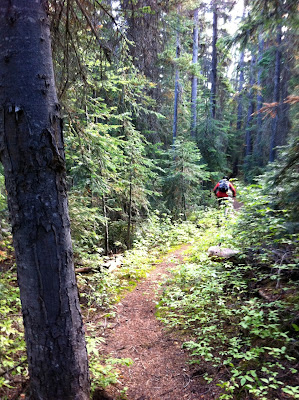 our beautiful pine needle and packed dirt trail meandered down the flanks of the mountain in an extremely pleasant fashion but although the valley continued, the trail ended at the border so we doubled back lower down, crossed the creek and followed an old doubletrack/singletrack/creek bed out and around the backside of the mountain and back to the road. 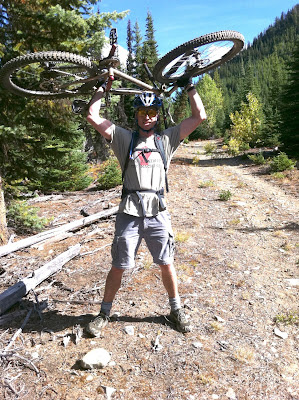 the round trip took us 8 hours and brought us through wonderful and varied terrain; both the views and the trail surface changed continually. high mountain trails have a glamour all their own. once again i feel so blessed to have these opportunities within an hour's drive of home. maybe there will be time for one more alpine ride before the snow hits!
at 9:09 PM 4 comments: 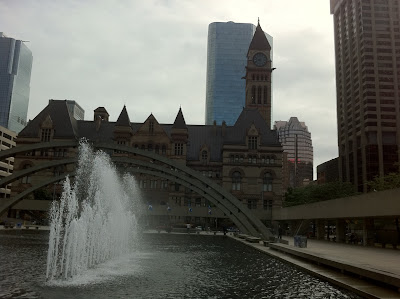 borrowing a page from my sister julie's blog, i have compiled a list of observations on toronto, a city i had occasion to visit this past week.

1. being a born and bred albertan, now west coaster i was fully intending to hate toronto, but it won me over. turns out it is quite an enjoyable city, with excellent food.

2. people move faster in toronto. i noted this almost immediately upon exiting the airport. everyone was moving about 15% faster than they would, had they been executing the same task in british columbia. this includes, but is not limited to, crossing crosswalks, ordering sandwiches, going through automatic doors, exiting parking spots and skidding to a stop through crosswalks.
which brings us to the next point:

3. there are a lot of bad drivers in toronto. and not just because it is a populous city. i saw more spastic driving in downtown toronto than i have seen anywhere else. midintersection accidental brake stands, 5 point parking spot exits and numerous rim/curb abrasive encounters.

4. the food downtown is fantastic. i stuffed myself with shwarma, falafels, and baklava, unavailable in chilliwack, as well as roasted chicken pitas and philly cheese steaks. there was carribean, indian, lebanese, or thai food on every corner.

5. the waterfront is quite nice. my friend dave mentioned that the toronto waterfront was notoriously ugly, however the portion that we explored was lovely. 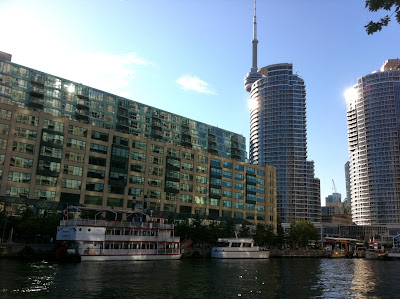 6. i have it on good authority that the greater toronto area produces more pollution than the oilsands.

7. at night the streets are all jazzed up like brussels. apparently some people are up in arms about the corruscating light show on the cn tower. maybe its extra glitzy right now b/c of tiff? but you dont install coordinated purple backlights in the top 5 floors of your office building just for a film festival. 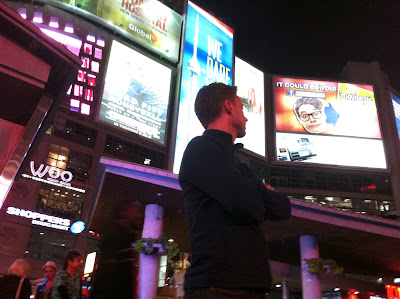 8. torontonians are fantastic hosts! in my random study, with an n of 2, i can reasonably conclude that all residents of downtown toronto are warm and welcoming and are happy to share their apartment with you and walk you to work and show you the best shwarma places. 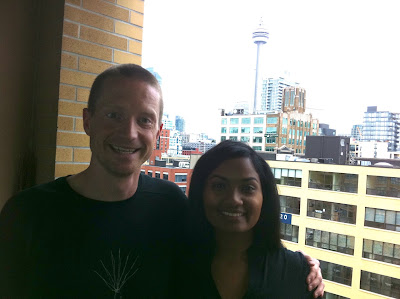 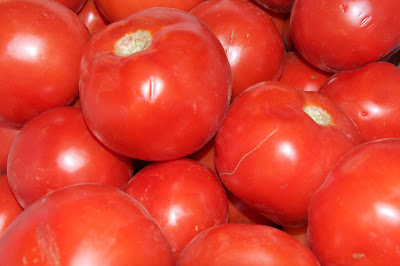 Shareen and I spent this past long weekend helping it live up to its name - we did some hard labour canning 60 pounds of tomatoes (which we turned into sauce) and 20 pounds of peaches.

We started Friday night by boiling all the tomatoes down . . . 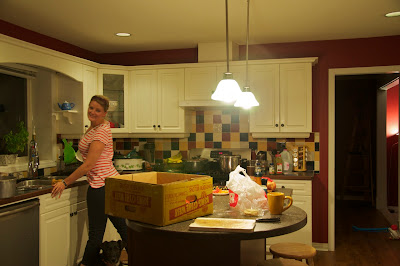 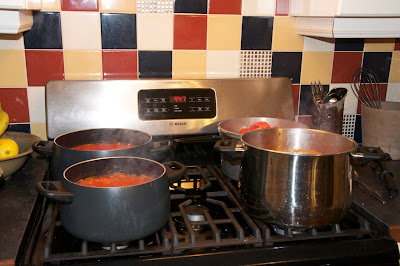 And the next day adding spices and carrots (for thickness) then blending them all into sauce. Lots of work but well worth it. mmmmm 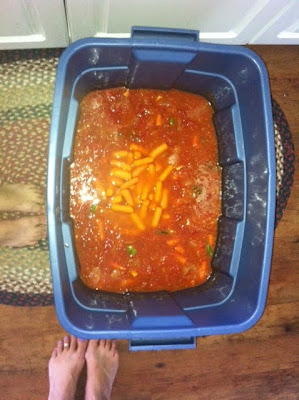 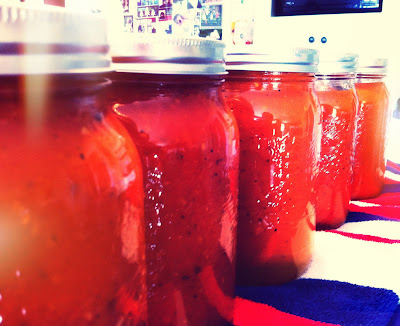 The next day we started on the peaches. We put them in the sun to ripen faster. Lucky Shareen did most of the work while Marc and I went to a BBQ. Thanks Shareen! Unfortunately we were so frantically trying to finish the canning, we didn't take a picture of the final product. Close your eyes and imagine 18 large jars of juicy Okanagan Peaches. Tasty! 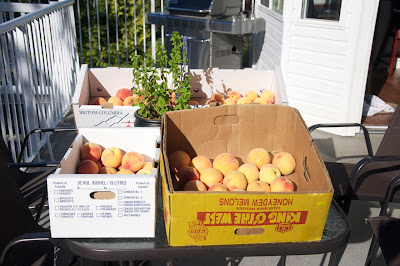 While also doing the majority of the canning, Shareen also babysat Ty so Marc and I could go out for dinner. Here she is being paparazzi auntie! 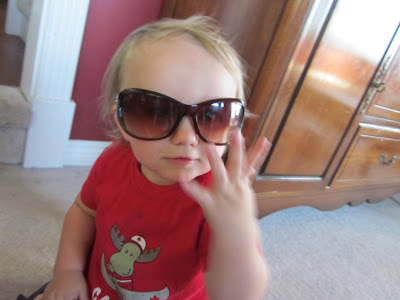 The whole weekend was not hard labour though. Shareen introduced us to Mexican Bulldogs. . . a margarita with an upside down corona. mmmmm Best enjoyed on the patio with a silo in the background. 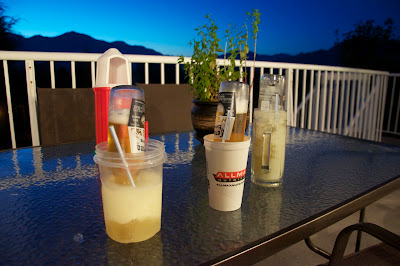 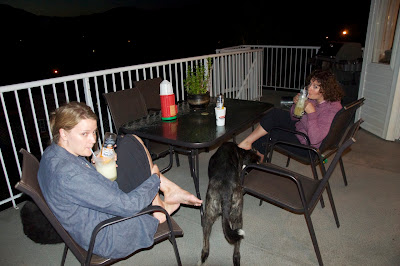 Last week we also headed up to Sheridan Lake to a friends cabin for a couple of days. No worries, lots of relaxing there too! The kids had a great time and so did the adults. 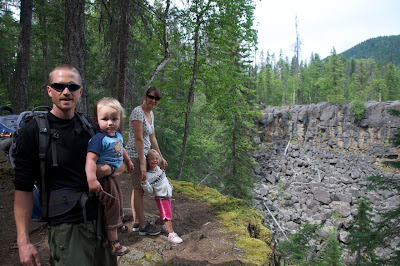 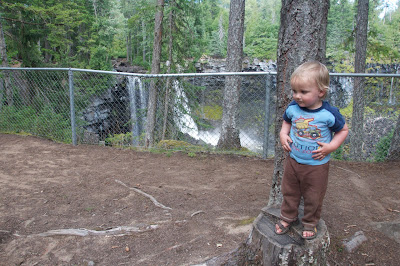 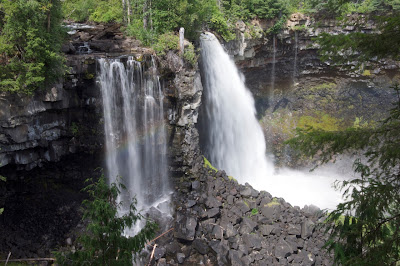 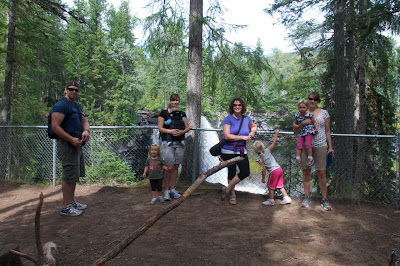 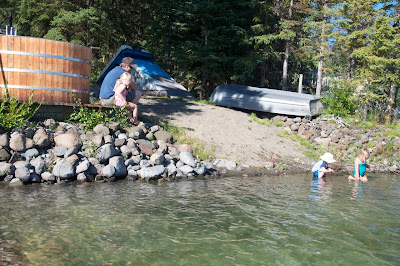 Hope you all had a great weekend that involved lots of relaxing and not too much labour. ;)
at 8:52 PM 1 comment: