Uajosh, the politics of football and a teensy weensy obsession

So Josh came to visit us last weekend and we had a great time. I think we have the record for the number of visitors who have come to see us while staying in Kapsowar, especially when you take into account the amount of time we have been here. Marc’s parents and sister Carlynne will arrive on Tuesday and they will be our last (of many!) visitors that we have had when we have been here. Josh arrived on Saturday and we spent the day visiting, sleeping on the lawn and attending the last few minutes of the mama’s football game. (More to come on this later.) On Sunday we went for a jungle hike and attended yet another football game. On Monday both Marc and I did a little bit of work (Marc more so than me) and went to another football game. Do you sense a theme here? We ate great food, had a lot of good discussion and just generally enjoyed our time with Josh. 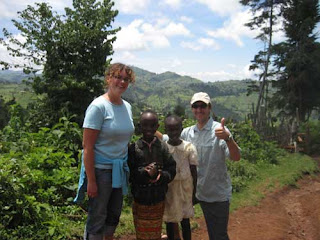 On our jungle hike with Josh and yes I am wearing pants. I have been feeling a bit rebellious as of late.
As mentioned, we have been watching A LOT of football (soccer for you Canadian and Americans) lately. There is a tournament going on right now throughout Kenya that involves a cash prize of one million shillings for the winning team. (About $17 000 Canadian, split between the team.) The prize money is being supplied by a Kenyan politician (there are elections here in December, this is the Kenyan equivalent of “buying” votes) and the teams participating are all “mamas.” (Adult women, a lot of whom are mothers.) We have been to about four games like I mentioned and have only witnessed one that actually ended. The others have all ended in conflict. One ended when the opposing team received a red card for an illegal substitution and decided that they didn’t like this and protested by refusing to play. They all sat on the field and the game ended when Kapsowar kicked the final goal with no opposing players. We thought this was the end of the game because the other team refused to play but we later heard that they would be “re-playing” the game. On Wednesday the Kapsowar mamas went to Cheles to play another game in the tournament but the other team refused to play because of some conflict. Yesterday the Cheles team came to Kapsowar but I watched them all sit on the field for over 5 hours refusing to play because of some “conflict.” This is what everyone here calls it. We are very confused as to why none of the games are played but it is interesting nonetheless and definitely makes for some good gossip in town. 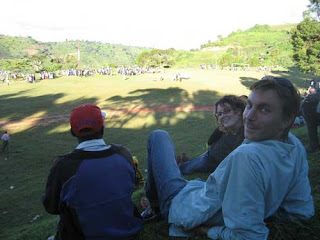 At the "end" of one of the games, wondering what is going on.

Lastly, I am a little obsessed with a television show we have been watching as of late. Our friend Darren told us about the show “Veronica Mars” before we left for Kenya and we downloaded the first season. After watching the first season, I begged and pleaded with Darren to send the second and third season with my mother, which he so graciously did. We now only have two episodes left in the third and final season and I am really not sure how I am going to cope after we watch the last two. I have become (maybe) a little obsessed about whether Veronica and a certain someone (I will not ruin it for all you potential viewers, I know the power of MY written word) ;) will end up together. I realize that this is totally a ploy by the producers to get me to watch and has been used countless times by a plethora of television and movie producers. I in fact used to love chick flicks but do not like them anymore because I find them so predictable. (Couple falls in love, breaks up because of some tragedy/misunderstanding and gets back together in the end.) However, I have fallen hook, line and sinker for Veornica Mars. I love the witty dialogue, funny jokes, interesting plot and romantic tension. Yes I realize that Veronica is in her first year of college and if she and a certain someone end up together it will probably not last the test of time but I have become a little overly obsessed (please realize friends and family that I have absolutely no TV access here so this is my only media outlet) and even remarked to Marc the other day that I may need therapy if Veronica and her beau that I love so much do not end up together. Why am I admitting this for all to see? I am a 28 year old woman who has been out of high school for 10 (actually 11 this year ACK) years but yet I am obsessed with a high school romance. I guess since there is no therapy in Kapsowar this will be my form of it. Hopefully I will not be posting on Monday in a pile of tears and desperation. (We plan on watching the season finale on Sunday night.) 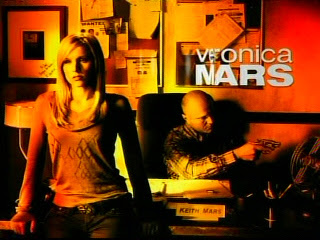 your entries are priceless and this one just reminds me of how much i miss you.