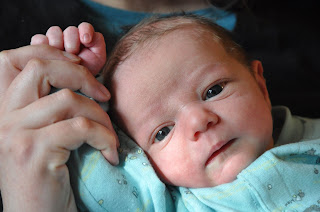 we have had a lot of questions about tyrn; most of them have been about his name, but there have been a few about skin to skin contact. both topics will be addressed in this post. 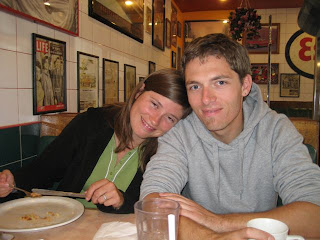 our friend tyrn was one of my housemates in edmonton. josh, aaron, tyrn and i all shared a sweet little house just south of whyte ave. the four of us became and remain good friends. 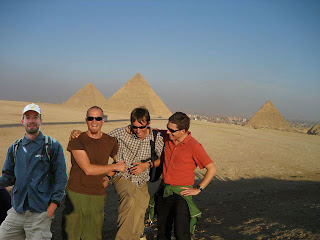 josh, as well as tyrn and his beautiful wife kelsey joined us in egypt. aaron was there in spirit. 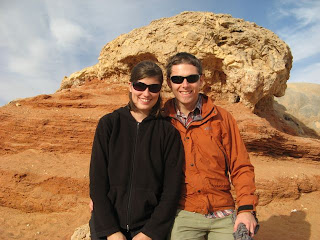 we like tyrn and we like his name. i know i just transcribed it as TIE rin in our previous post, but perhaps a more precise pronunciation would be TIE urn. tyrn's mother deb was telling me that she was looking for a spelling for the name that was in her head, and tyren and tyron just weren't right. she met with some resistance, but we agree with her that "tyrn" is an elegant way to represent what people actually say. even when the name has an extra vowel on it, familiarity and phonetic expedience would shorten it on most peoples' tongues to TIE urn. way to go deb! both tyrn and his mom seem really excited about having another tyrn around. 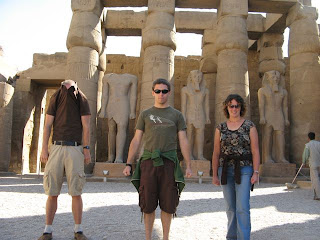 now on to the man. tyrn is a quality guy. he is sincere, funny, energetic, honest, friendly and fun to be around. i think he came up with the idea for the above picture. 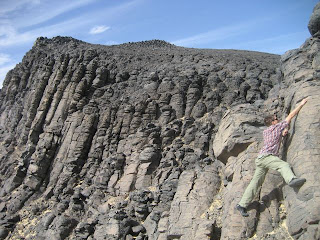 he enjoys climbing and adventure 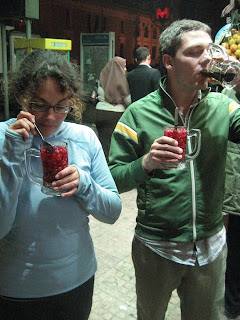 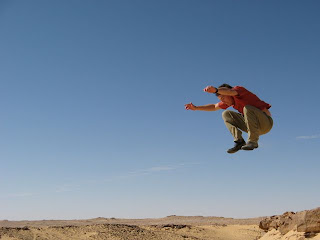 and jumping off things 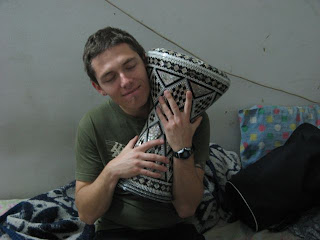 and probably most of all music. ty currently plays in a band called pre/post and being a drummer is a big part of his identity.

we love the name tyrn, and tyrn senior embodies many of the characteristics we want to see in our son, so it works out well. thanks for the name tyrn and deb! 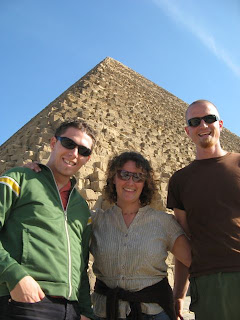 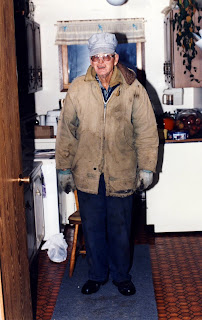 james is to honour my grandfather, james rose, jim to his friends. i am his only grandson and was named marc james after him. 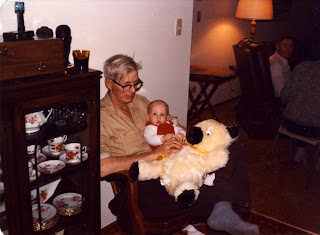 i wish he had lived long enough for me to know him in adulthood, but i got to spend a lot of time with him growing up and visiting the farm every summer. i remember a kind, generous and often understated farmer who was just a little rough around the edges. he was strong, resourceful and loyal. his cheeks were grizzled and his hands were tough and he called me "mark'n james". i hope tyrn james takes after him. 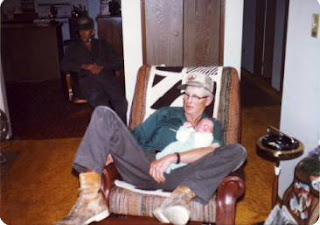 i just realized that i always sit like that. 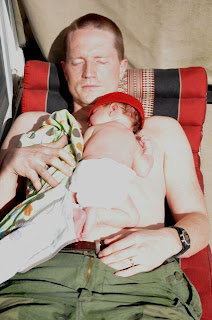 now on to skin to skin contact. one week in i am a big proponent. it is the easiest way for ME to settle him down. infants have immature and untried physiologies. if he is in direct contact with me or kylie he can hitch a ride on our homeostatic mechanisms, thus freeing up the energy necessary to maintain a constant temperature to be used in growth or immune function. oxytocin is most likely involved in some pleasant way as well. the above pose gives the added benefit of vitamin D production and bilirubin breakdown. also, you may inadvertently burn your baby.

skin to skin contact between mom and baby immediately following delivery is another issue altogether, involving the reenforcement of maternal second messenger systems in order to clamp down the uterus and decrease bleeding and otherwise speed the body on its way to the post pregnant state. we have some pictures of kylie in this state, but in the interests of her privacy i will include another one of me instead. 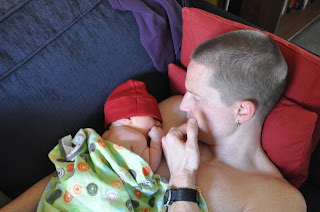 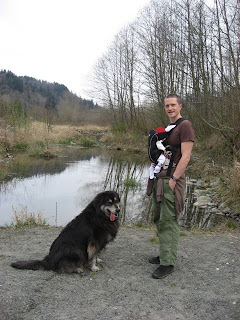 ty went for his first hike a few days ago. he loves his snuggly. or at least it makes him sleepy... is that the same thing?

kylie did great as well. feeling strong and feeding on the fly. today was gorgeously sunny and we took a walk to a different beach on the fraser. 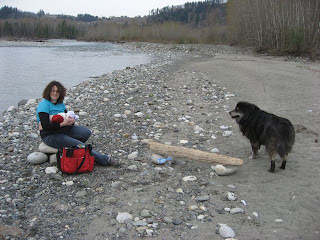 and lastly a farewell to the cherry blossoms as their season wanes. a quick thundershower with light hail knocked half of them off the tree and onto our subaru. it's now decorated like a parade float. ty thinks it's funny. 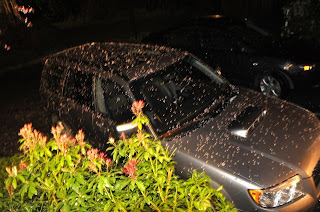 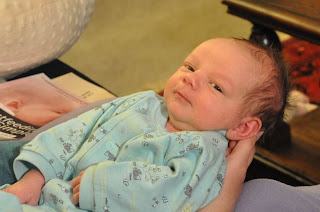 He is absolutely gorgeous. And look at that last picture! He's only a few days old and it looks like he is already planning mischief. Adorable!!
Vicky

I love the pictures! The pictures of Grandpa are great and I got a bit choked up for a minute. It was nice to talk to you tonight...here's to time off the couch!

Great pictures... I love the ones of Grandpa and you, Marc!

I am so glad you talked about baby skin to skin contact. This is very important as well for developing proper attachment of a baby to his parents, especially his primary attachment figure, his mother. I will be looking to see how Ty's attachment is in the future.

I absolutely LOVE the first and last pictures in this post!
The left lateral conjunctival hemorrhage is resolving nicely I see.
Can't wait to meet Ty in about 2 weeks!
Love,
Dad G

What a great post. Ty is sure a handsome, healthy little baby.
It was fun reading his name history.
I liked seeing Ty and Kelsey and hearing the history of Ty Sr.'s name.
I loved the pictures of Grandpa, and enjoyed what you said about him. He was a loyal, loving Dad :)
Good for you guys- enjoying the out doors together with the whole family!
Love,
Mum

Okay, I am so touched by all of this....... As I hold back these menopausal tears of joy, you're what a special honor this is. I most love the last picture of Ty smirking at all this fuss! I think I have one of Ty senior with that same look (31+yrs ago) Being they are both the first born I'm sure there will be many similarities we can share over these next fun filled years! Love Deb and gang

oh.my.gosh... this post has me in withdrawal of you 3! how sweet! marc - i saw this pic of you + your gramp before i read your comment underneath... you DO sprawl out EXACTLY like him! how funny! love you 3 + i'm so happy for you...
nolene.

This is really nice - I love the bits about
dad. You sure have him pegged! Thanks too for your bit of teaching - I always want to know what boils the pot. Keep us "posted". Love from Auntie Cheryl

Wow, I will always be honored by this. To have the ultimate shout out from people I love and respect is hard to take humbly. I will always try to make the name proud, and I'm sure Tyrn will do the same. Thanks for the kind words. It's great to hear and see James as well. You DO sit like that. I love the last pic too. That's a keeper.
Tyrn

Ty is my new screensaver. Even with his "left lateral conjunctival hemorrhage"...oh Dad.

It was fun to read all of those comments:) I really like the first picture of Ty with his eye open. I showed it to the girls sitting in my row at academic day last friday and they all just though he was the MOST ADORABLE baby ever!
I wish I knew Grandpa more as an adult too. It is fun to look at pictures of him and combine it with my memories and think about what kind of person he was.
we wish we could see Ty sooner than later. For sure in August. But maybe sooner. We will see:)
Luvs ya!

Awwww, Kylie (and Mark although we have never met) your little boy is sooooo sweet! I loved this post and totally appreciated all the background information.
Although, if I am being totally honest I was pretty much lost after, "now on to skin to skin contact." I thought about trying to copy and paste it to some online translator but I am fairly certain I have never seen a translation from "Medical Jargon" to "Dumbed-Down English" sooooo, if I am understanding you even just the slightest amount... skin to skin contact is good, right?

Oh. oops I just signed on with my google account and Kylie would never know that my childhood nick name is Shoz. So for reference sake it is Sherri from HFL :)
Although you may have guessed from the purple hair :) or possibly my smart ass remarks.

he is so beautiful, congratulations again!