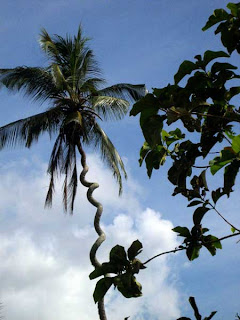 after 3 days of travel we are back in kapsowar. we took a morning ferry from stonetown to dar es salaam on the mainland, which was beautiful aside from everyone around us being violently seasick for the second half of the journey. in dar es salaam we got on a bus at 1 in the afternoon and didnt arrive in mombasa until 2:00 am! we were pretty grumpy but after a quick sleep managed to get in a full day of walking around mombasa (being jealous of carlynne's present for her fiancee dan, i bought an antique telescope of my very own) and being ferried around by little motorized rickshaws before hopping a plane to nairobi. yesterday we took a bus to eldoret (the road is worse every time we take it!) and then our LAST MATATU RIDE to finally arrive in kapsowar after dark. it feels good to be home. and it is home, for another 10 days at least.

now that we are home we can put up more of our MANY pictures. i had to edit my list considerably and i will have to leave some things (such as swimming with dolphins) for another time. 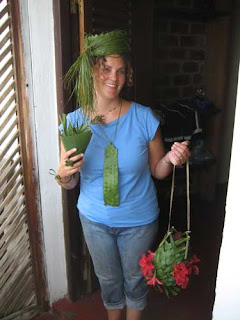 from stonetown we toured a spice farm to see what spices look like when they are growing. it was actually extremely fascinating (maybe we are getting old). zanzibar is famous for its spices and they are everywhere. even the coffee is boiled with cardamom, nutmeg and cinnamon. the baked goods zing with ginger and lemon, and the seafood is swimming in paprika and curry and pepper and tumeric and fennel and cloves and on and on and on! at one time zanzibar produced 95% of the world's cloves. the picture above is kylie decked out in her impromptu spice farm regalia. 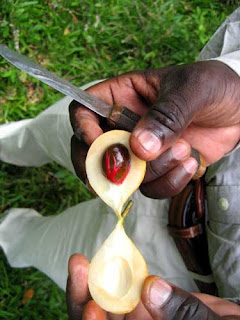 this is nutmeg. you throw out the fruit and grind up the nut. beautiful eh? pepper grows on vines that climb up other trees. cloves are a dried flower that is picked before it opens. 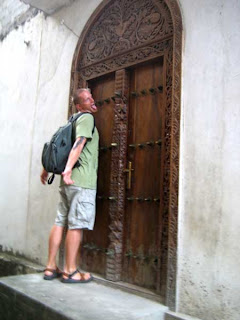 as mentioned previously, we did a lot of just wandering through the streets of stonetown. this is me accidentally being multiply impaled by a traditional swahili wooden door. the spikes are a holdover from india where they functioned to deter direct elephant assaults. 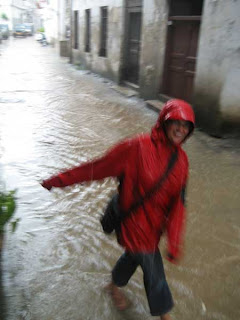 here is kylie walking in the rain. we had beautiful weather for our entire trip up until the last day when it rained so hard that the streets became rivers. 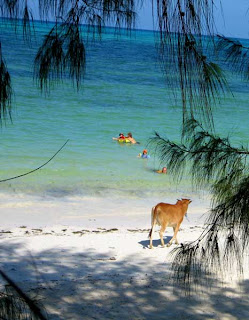 this is a shot from the porch of our banda near jambiani on the southern end of the island. our little guesthouse was nestled comfortably on the headland of a quiet beach midway between 2 small fishing villages. the women walking by from one town to the other were resplendent in their multicolored kangas. if you take an african gene pool and mix in a good portion of omani arab and indian bloodlines you end up with some extremely beautiful women and incredibly cute kids. 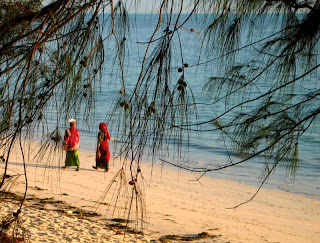 also from our porch. 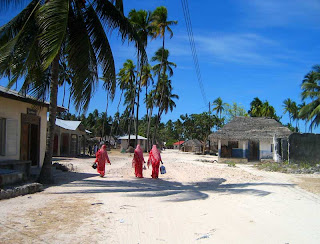 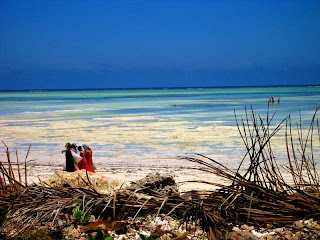 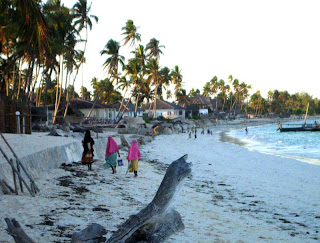 the local ladies are able to gain a measure of financial independence by farming seaweed. basically they tie little sprigs of seaweed to a rope, then stake it in the tidal plains and let it grow. when it is big enough to harvest they gather it, dry it in the sun and then sell it to an exporter who ships it to asia (don't they have their own seaweed you ask? i am sure they do... maybe this seaweed is special). 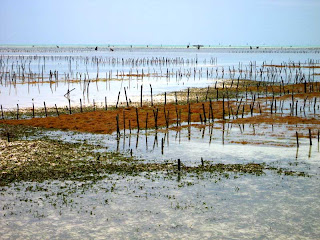 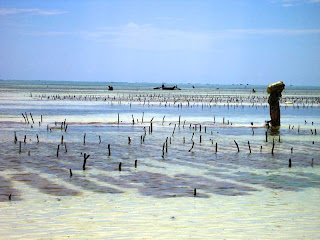 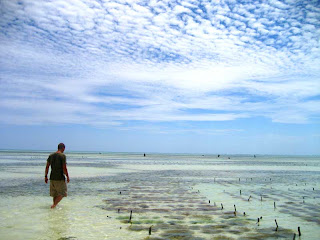 well, that's all for now. tomorrow we go back to work and start packing up our house. kylie also volunteered to babysit juliana and chara and steven from monday morning until tuesday morning so i had better conserve my energy for roughhousing (where did that word come from i wonder?) 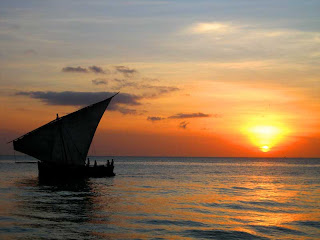 I love the rain picture!!! Looks like those expensive sandles came in handy! I can't believe the end of your trip is so soon! I have so enjoyed reading of your adventures!

Hi Marc and Kylie-it's Devon and Stephanie May. We've known about your blog, but we're just getting into blogging ourselves and thought we should check yours out. Here's little Emmy's blog..
watchemmygrow.blogspot.com, feel free to add her to your blogosphere.

We'll miss you all at the Christmas Tree Hunt this year, hope to see you soon!

Your holiday looks like it was beautiful! So jealous while sitting in this cold BC rain. Love you guys
-Angela