i suppose we are now officially home in chilliwack: we are no longer camping in our house, kylie has signed up for tahitian dance lessons and i have just finished my first day of work. the fraser valley welcomed us with a few sunny days before the rains set in again, only to retreat gloriously in the face of one of the most beautiful spring saturdays i can remember. 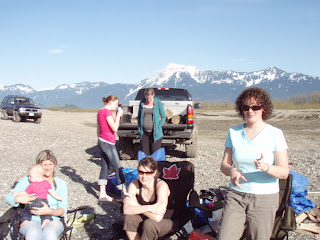 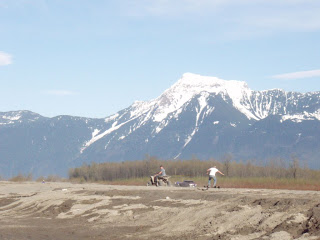 4x4ing, quadding and generally having a redneck good time down by the river

one day while still in kenya i flipped through some books at the AIM library in nairobi (while we were waiting ALL AFTERNOON for our passports to be returned to us) regarding "reentry" into the western world after working in the developing world. we thought it was a bit overstated but were forewarned. travelling across the middle east, we heard a lot about reverse culture shock, but with kylie pining for canadian conversation and me excited about mountain biking in the BC summer we thought it didnt apply to us.

finally during our time in europe, staying with good friends in holland, germany, norway and england we thought we MUST be minimizing our adjustment by slowly reengaging with western culture. i remember picking up our friend aaron straight off the plane from taiwan and having him stare at us in bewilderment when we asked him simple questions. he claimed that he was continually surprised that we (and the local shopkeepers) weren't speaking chinese. 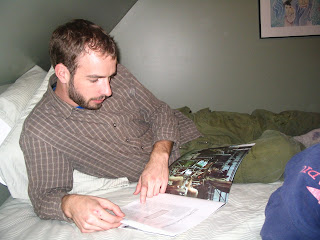 note the army pants. i am not alone.

when we arrived in lethbridge we congratulated ourselves on avoiding the worst of reverse culture shock... mainly we noticed how nice, helpful and considerately conversational canadians were. kylie and marc, the intrepid backpackers, able to adjust to new cultures in a single plane ride. boy were we wrong.

i think to our minds, lethbridge and edmonton where just extensions of our time in europe. staying at people's houses and talking and going for walks; not too difficult. the first odd feelings came when we were nearing revelstoke to pick up niko. 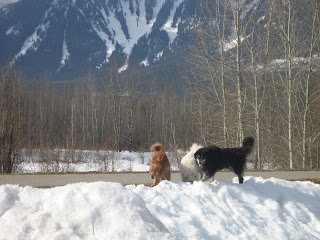 despite all the anticipation and time spent missing and reminiscing, as we approached revelstoke both kylie and i started to feel extremely nervous. i almost suggested going out for coffee in town before picking him up. perhaps this was partially b/c we were unsure of how he would react to us. we neednt have worried on that front though: he came barrelling through the door and couldnt stop running back and forth between us to say hi. after the initial excitement wore off he literally stuck by our side. his head was continually pressed against me or kylie's leg for as long as we were in the appt. the next morning he was sitting at our bedroom door to greet me, followed me around the living room and settled against the bathroom door while i got ready. he then proceeded to step back into life in chilliwack like he never left.

the next morning we left for chilliwack, and after an enjoyable interlude with our cousin nevin and his miracle kid katie in kamploops, we set across the coquihala to the fraser valley. again, as we passed through hope, kylie and i each felt knots forming in our stomachs. arriving in the fraser valley created a strange nervous feeling that only intensified as we drove into chilliwack and down beautiful airport drive to our house (the road is lined with japanese plum trees that had blossomed just for us). 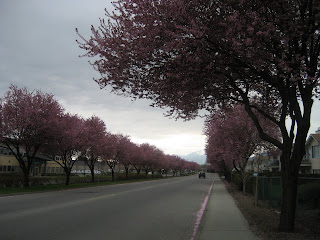 we relaxed a bit once we had unloaded the 4runner into our home and our renters had finally left (albeit without moving out of the kitchen!) but still every foray into our old lives recreated the same strange hair raising panicky feeling. we felt very wierd about going to church for the first time and almost turned around and left in the parking lot. even going to reconnect with our good friends ang and chad was disconcerting (until we got there).

the whole strangeness climaxed for me at safeway. we went to pick up toothpaste and garbage bags; armed with clear goals in the task ahead i marched confidently into the dental aisle only to be confronted with almost a hundred options for a standard sized tube of toothpaste. i just about had a panic attack. if it wasnt for kylie standing behind me i think i might have bolted and subjected everyone to my unbrushed breath.

anyways, now we are more used to canada, and i actually DIDNT feel all those crazy things when i went to the hospital this morning, which is a very good thing. i actually quite enjoyed the day and am looking forward to tomorrow (although i hope i get home before 7:00).

we are also enjoying exploring our old haunts. i have had 2 great rides on vedder and we have met some old friends at our favourite off leash area. 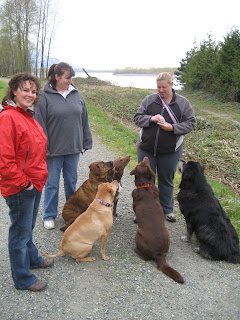 so. i know we have no reason to complain, we just got back from 4 months of no schedule and responsibilities and poor marc has to go back to work when he would rather head to malaysia to see ty and kelsey. i enjoyed the challenge today at the office and both of us are looking forward to a summer of good times with good friends in a great place. home sweet home. 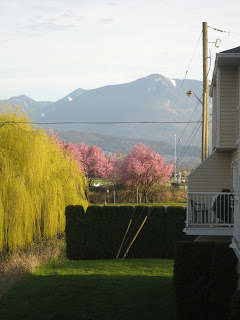 dude i think i must have borrowed those army pants from you. when was that picture taken?

ty and kelsey are supposed to arrive here in singapore in a couple hours... you guys are welcome to come over for dinner. haha

And I'm glad you (Kylie) were standing behind Marc in the toothpaste aisle as to not expose B.C to Marc's unbrushed breath. Hee hee :)

we look forward to being able to come visit you soon and enjoy some of those wonderful summer days together. and Kylie, I am super stoked for our girls weekend...

Hey! My cousin Jason VandenBerg and his wife Emily both work at the Hospital in Chilliwack. Is there only one hospital? He's an X-Ray tech and she's an RN. I can't remember if Marc met him in Lethbridge before. Anyways! I'm glad Marc got the toothpaste! Very important when you deal with patients all day!

Hi Kylie, glad to hear to you made back to Chilliwack. Just to let you know that they are in dire need of Dr.s in beautiful Vernon! ;-)

Reading this post is like being told you're going to stub your toe later today. Ominous and eerie! You guys are freaking me out. I wonder where our dental aisle will happen.
PS, the plum trees look awesome.
T.