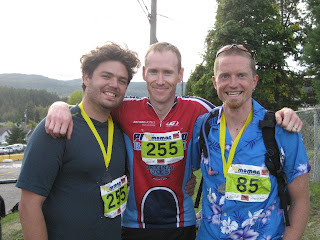 this weekend we stayed with our friends matt and monique, liam and tor in the comox valley. we were there so that i could do the mind over mountain adventure race which consisted of:
9km kayak
15km trail running
20km mountain biking

matt and his friend scott were doing the race as a team of 2 and i entered as a solo racer. the kayaking and biking portions were marked, but the rest of the race was totally unmarked and involved collecting a bunch of checkpoints and navigating with a compass and topo map.

my time was 6 hours 10 minutes. the fastest time was 4 hours 1 minute (the MOMARs self sponsored race team blew everyone else out of the water!)
there was 280 racers, some solo, some in teams of 2 or 4. i placed 43rd out of 120 teams which i am ecstatic about. i did the race solo, but hooked up with matt and scott during the bushwacking/orienteering portion where we helped eachother out.

i found all the checkpoints and completed all the requirements and had an absolute BLAST! it was funny, i thought the biking would be my favourite, but the uphill was painful, and the downhill/xc, although fun, was quite frustrating b/c i kept catching up to people every 15 seconds and then i would have to wait to find a good spot to pass and then open it up only to have to slow down again 15 sec later. my favourite part was running by myself through the wilderness in cumberland with my map in my hand, not seeing anyone and having no idea if i was in the right place or not, then finding a checkpoint right where i thought it would be according to the map. at times the course was crowded, but by the second half of the race as people spread out and chose their own routes i would go 20 min without seeing another person.

the actual race was pretty mixed up... the kayak stage was first and took a little over an hour. it was a gorgeous sunny day and a perfect time to be out on comox lake in a kayak. then there was an hour of bushwacking/orienteering/trail running/getting stung by wasps (i got stung 4 times) where you had to find checkpoints marked on a map in any order while navigating by compass and map and topography... seriously fun, but crowded.

then there was the first biking stage. it started with a quick road ride, then some xc riding uphill, then a nasty grind up to the top of the mountain, then a sweet sweet downhill. this part was fun b/c i was continually passing people going up and down (although also frustrating on the singletrack downhill as i mentioned)

after that was the main trail running stage, where again you had to find checkpoints in any order and you could take any route you wished... the fire roads and bike trails were marked on the map to help you navigate. that was seriously fun. i never got fully lost, but i did end up collaborating with other semi lost people on the trail. i got a huge second wind after completing the uphill run and starting down. i was flying down the trails and leaping from rock to root in an excessively flamboyant fashion b.c i was having so much fun. regular blog readers will be well aware of my penchant for leaping off rocks, now picture me leaping off rocks across downhill switchbacks in order to pass people going down, or avoid people coming up. at one point i miscalculated, slipped on a rock i was clambering up and got slammed in the head by a guy running downhill. i got my bell rung, but shook it off and kept running.

after that there was another mountain bike stage to get back to town. that one was a lot more fun b/c people were much more spread out and i could really open it up and fully experience the cumberland singletrack. finally once we hit town you had to ditch the bike and do one final stage through downtown cumberland. a team of 4 that i had passed in the final bike stage caught up to me looking for a checkpoint in a park. i helped them find the area but then when they found the checkpoint they kept it to themselves and i had to keep looking which ticked me off a bit. i caught up to them at the final checkpoint and sprinted past them into the final stretch. i had to keep the pedal to the floor for the last 2 blocks and it was PAINFUL!!! the first 2 members of the team caught up to me, but i beat the last 2 in which meant i beat the whole team! that was pretty sweet as they ended up coming in third for the 4 person teams. (i would have been on the podium if i was 4 of me!)

the only sad part was that kylie was late coming to the finish line so she didnt see me finish. i had so much emotion boiling through me after finishing that when i realized she wasnt there i almost started crying. monique and kylie and the boys did make it in time to watch matt and scott come in though. liam even ran out on the course to greet his dad. 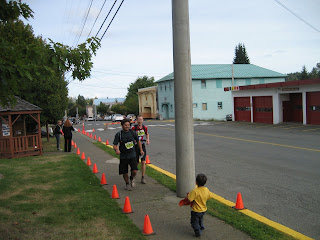 the next day we went to church and then just hung out in matt and monique's incredible backyard off the comox river. their own personal campground. while we weren't too stiff, we certainly werent in the mood to do much more than talk and nap. 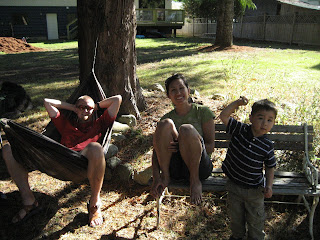 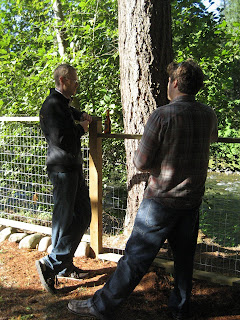 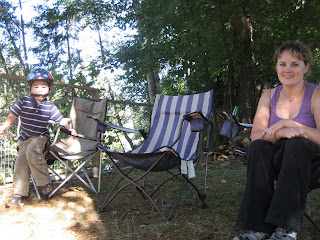 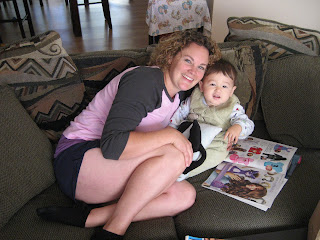 the next day we went for a nice xc ride and then had a picnic by the lake. 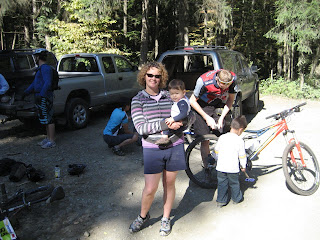 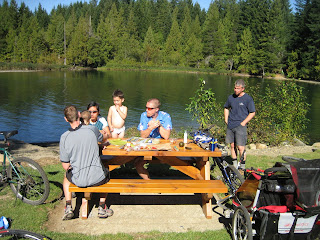 after that it was back to the ferry to take us back to real life on the mainland. we will be back though! thanks matt and monique for being such great hosts! 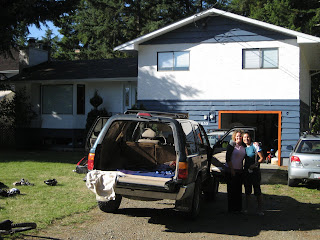 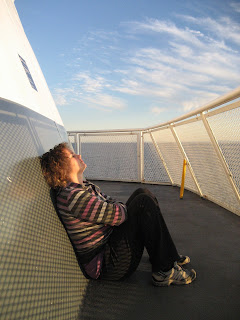 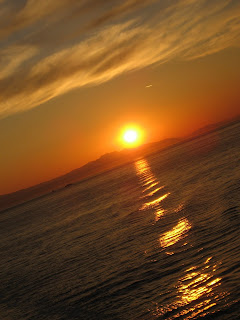 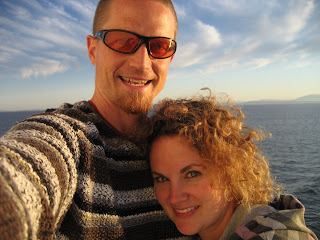 Wow! Great job Marc!! Thanks for the description of your adventure. I was almost late for spinning class this morning b/c I had to finish reading...! Dad and I are very proud of you!! Love Mum :)

thank lowell... i couldnt get up the energy to describe the whole race (its even long to talk about), but then lowell asked about it so i just copied and pasted my email to him.

Awesome job Marc! Sounds like a great adventure! The last picture of you guys is fabulous!

dang, mind over mountain is such a good name...

someday you and i will team up and get on that podium marc. i've foreseen it. but, in the meantime you better keep runnin'.

Wow Marc. I laughed out loud at the flamboyant leaping part. I can imagine it very well. Congratulations on this adventuresome achievement!!

Wow Marc, I'm so proud of you!

Remember the Friends episode where Rachel is embarrassed to run with Pheobe b/c she was so flamboyant? Well that's how I pictured you dodging rocks and having the time of your life. It made me laugh:)

PS- When our internet isn't so stinking slow, hopefully all the pictures will load so I can get the FULL idea!

thanks for all the comments. aaron, yes we have to do this together sometime, which means i need to get faster.
jill, i'm glad you noticed that last picture... its not photoshopped at all, we just have this beautiful gold light shining on us from the sunset in the prev. pic.
julie and carlynne, i am glad that my excessive flamboyance amused you, it certainly amused me.