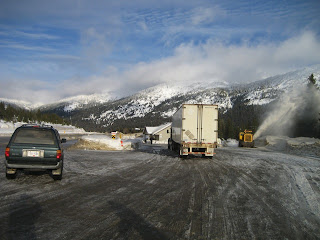 today was a weird day. we started out in the 4runner this morning thinking that we were going to end up in revelstoke by this afternoon but just past the top of the coquihalla pass the engine died. luckily we were able able to coast right into the parking lot for the washrooms beside the non existent toll booths (it really is a bit eerie... with the snow covering everthing, they are gone, gone... nothing to suggest that there used to be a giant barrier across the road). also luckily our cell phone had reception.

after phoning a random tow truck from hope to come and pick us up we took niko out of the back for a little walk in the snow beside the road. there was a nice little clearing in a depression that totally blocked out the highway and vehicles and we were enjoying the sunshine until this beast came along. 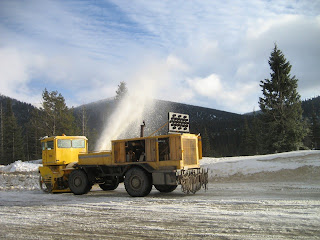 it has a wonderfully nasty looking spinning blade mounted under the cab that chewed away the snow and propelled a lovely mix of powder and hunks of brown slag onto the shoulder. the shoulder where we were walking niko. the snow was deep and kylie kept falling through to her waist on our run to hide behind a tree. after the initial onslaught i started up the hill to the car, but when the driver came around for a 2nd pass kylie fled back to the tree and i was forced to follow or split ranks. before the 3rd pass began, kylie and i made a team effort to run up the bank and jump off the drift into the parking lot with the spinning blades of death bearing down on us. the driver didnt seem too sympathetic.

after a short wait our towtruck arrived. right away it struck as odd that the driver didnt say anything to either of us. he just backed up and started hooking up the truck. eventually he threw out the common greeting "just throw it in neutral."

when we jumped in the cab, kylie looked in vain for a seatbelt. "no belt in the middle in this truck" were the next words the driver uttered. kylie began having serious deja vu to many trips in kenya and egypt. we began speeding back down the coquihalla while the driver fumbled with his cell phone, took his hands off the wheel on several occasions (once to answer his phone while we headed straight for a curve on a bridge over a canyon). the driver was talking on the phone with one hand and gesturing with the other, and only after kylie caught him nodding off did he tell us proudly, "my day started at 1:00 in the morning and i been going hard every since."

so with kylie trying out all the coversational gambits she knew to keep our driver awake through the fraser valley, we made it safely to our mechanic's. we got out of the truck as fast as we could, but not before the driver had an argument with the owner of the shop.

after unloading the 4runner and extracting a tired niko we hopped in our nifty subaru courtesy car (the volvo wagon had been totalled by another customer weeks earlier) and arrived at the end of the day, here in chilliwack, right back where we started.

luckily, our friends julie and chris are awesome and are going to drive out from revelstoke and meet us in kamloops tomorrow, so we will still get back tomorrow night if all goes well. we say goodbye to niko for a few months :-( and then it's off to new zealand! :-)

with all the stressful rides and craziness kylie is already feeling like she is travelling... both of us felt like we were back in kenya trying to advise a clueless driver, or in egypt trying to keep a sleeping one awake. soon we will be in vietnam, trying to get off the daily bus in the right town and not get stranded. a good reminder of one of the stressful (for us both) but also fun (mostly for me) aspects of travelling. we leave in three days!!
at 10:25 PM

Well, hopefully your flight to NZ will be a lot smoother, and the pilot will be AWAKE...for all 12 hours.

Can't wait to see you. I've ordered pure sunshine for Sunday, so get ready to peel off those winter coats!!

PS- perhaps you should temporarily change your blog title to mkginnz. Hee hee:)

Can't wait to see your posts from NZ!! Safe travels!

And yeah, i hear ya about the creepy "toll booth" thing. It's like a ghost town up there.