Are you tired of kayaking pictures yet? 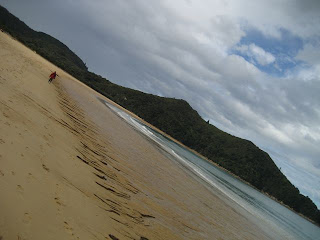 Marc and I are back in Auckland after a month long, very wet trip to the South Island. Somehow the only time it managed to not rain was when we were kayaking. We should have made our trip a month long kayak around the South Island. Last week we headed to Abel Tasman Park and embarked on a two day kayak trip of epic proportions. (Well maybe semi-epic, it was only windy for a day and a half, but I am getting ahead of myself.)

When camping in Abel Tasman you have to book a certain campground ahead of time. The first campground that is a popular one day kayak away from Marahau (Abel Tasman access town) was booked so we booked one a bit further. It was a bit windy in the morning but by the afternoon we were battling through waves and whitecaps. We made it almost to our beach when it got really windy and after consulting our trusty map we figured we only had one more point to battle around. After rocking back and forth and going further and further out to avoid the exposed reef we finally made it to what we thought was "our" beach, only to find out that we had gone WAY too far and had done what most people do as a two day kayak trip in one day.

We (read I) decided we would not be going back to our initial beach and would hopefully not be taking up the 11th tent site as only 10 were allowed. Amazingly we ended up having the beach to ourselves, which is apparently unheard of at this time of year. YEAH for windy kayaking and map misreading!

Our own private beach 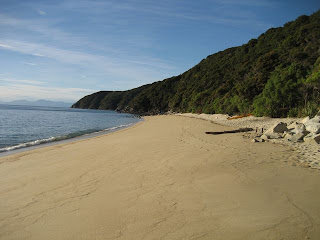 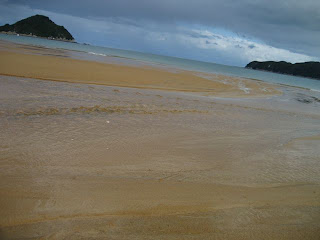 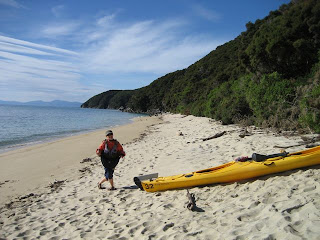 Doing a curtsy in my kayak skirt 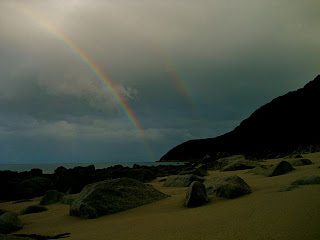 It happened to be a full moon that evening, so we watched the moon rise above the island. We also used the light from the moon to go on a possum hunt. We were successful within minutes and managed to scare the possum enough to keep him away from our food and tent, unlike some of the previous nights campers. 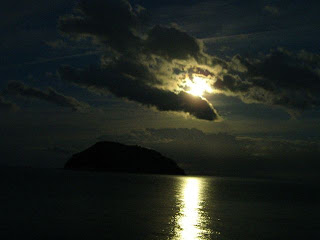 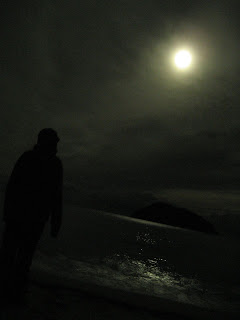 The next day we woke up to a beautiful sunrise and calm waters and set out for a much more peaceful paddle. 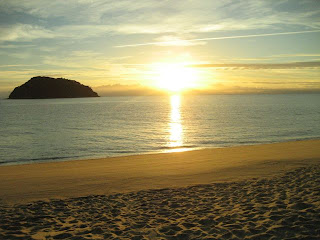 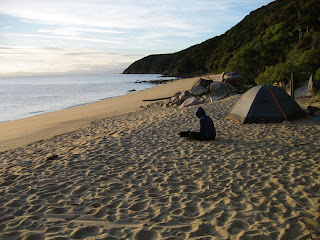 We paddled to an island that had a seal colony and watched the seals frolic in the water and even saw some baby seals! 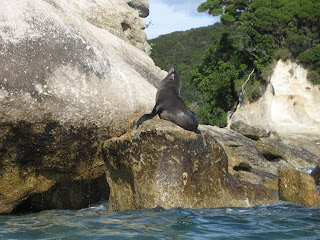 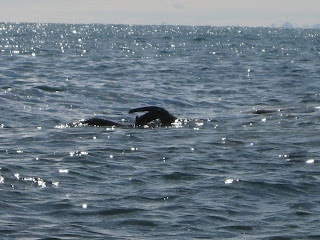 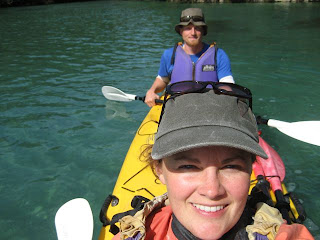 How many versions of this picture have you seen on our blog?!

After seeing the seals and exploring a lagoon we kayaked out to another island and found the perfect lunch spot just as the tide was going out. 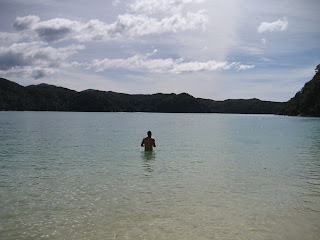 We both took a dip, Marc's a little longer than mine.

During our lunch break the wind came up again with a vengance and as we made our way (slowly!) back to the mainland and were stopped by a kayak guide, telling us that it was WAY too windy to head back to shore and we should leave the kayak for a water taxi to pick it up and walk back along the Abel Tasman coastal track. The track goes along the coastline and while walking we watched one kayak painfully, oh so painfully make its way back to shore. I was so thankful we were not the ones doing the paddling and were instead using our feet to move. After a great hamburger we headed to Nelson, NZ that is, not BC but I think they are basically the same town. Pictures to come soon!
at 12:42 PM

Ooooo, your pictures are bee-ootiful!

PS- While I'll be sad when you leave this country, I'm not gonna lie... I'm greatly anticipating claiming (partial) ownership of your camera!!