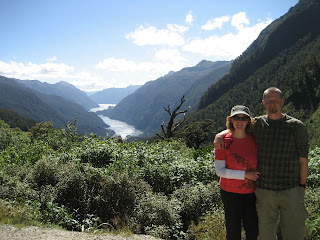 we just got back last night from our 2 day kayak trip on doubtful sound (fjord). i guess that God listened to some of you as we had 2 days of fantastic sunshine, but NO rain. we will take it though.

we were picked up dark and early at 6:15 and boarded a van that drove us to a boat that took an hour to cross lake manapouri, where we boarded a bus that took us over a pass to deep cove, the inland arm of doubtful sound (every country needs a deep cove).

from there we hopped in our kayaks and spent a little over 5 hours on glassy perfect water, again with sheer cliffs towering on both sides of us. hall arm, the piece of the fjord we explored most thoroughly, had cliff walls that werent quite as tall as milford sound, but were much closer together. 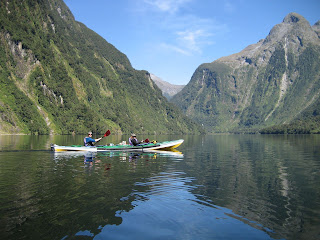 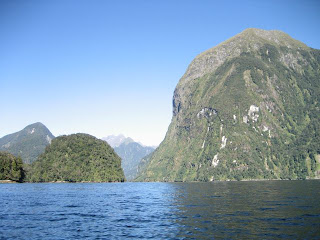 at one point we navigated "the narrows" which looked pretty skinny, but were actually more of an illusion created by the curve of the glacial track. very cool either way. 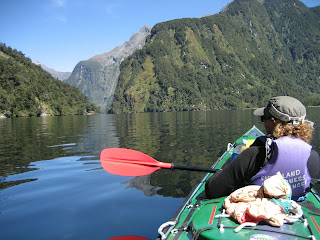 at the end of hall arm, we went for a technical hike/scramble up a creek bed (in jandles - that's what kiwis call flipflops) to a nice little waterfall. i collected water from the falls for everyone's waterbottles, and while scramblin back up did my own gollum impression at someone's request. 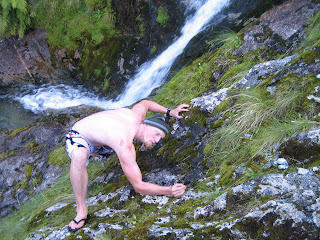 we camped that night in a permanent site run by fiordland wilderness experience. its main feature was a bug tent, which came in very handy as the sandflies were incredibly thick when we arrived. sandflies, like mosquitoes, need a bloodmeal to lay their eggs, but unlike mosquitoes, who subtley siphon your sanguinous solutions, sandflies just bite a chunk out of you, leaving a raw welt that itches like crazy. 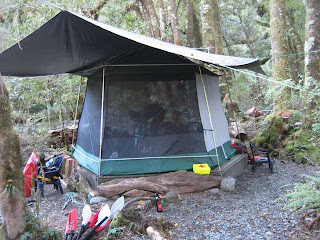 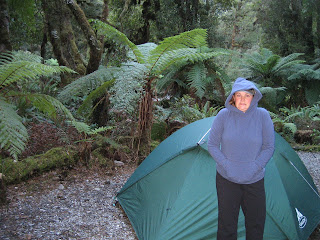 this is kylie bemoaning the swarms of tiny sandflies outside our tent.

as mentioned, we had no rain on this trip, which was PERFECT for camping. the next morning we started again at 6:30, and were packed up and on the water just after 8:00. our little arm of the sound was deceptively tranquil, but the main sound had a northerly wind at about 25 knots (that's windy). 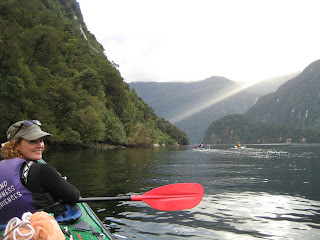 leaving our lovely protected fjordial finger was a bit of a shock, as we transitioned from calm water to 2 and 3 foot swells in a matter of minutes. for about an hour and a half we battled our way down the fjord against the wind, until we could circumnavigate a 3 km bit of rock called elizabeth island.

once we got around the point, the wind pushed us all the way back to deep cove. for a while we just rode the current with the wind at our backs, but when that got boring we pulled out the kayak sails and zipped home under full sail. we didnt get any pictures of this as it was all we could do to hold on to the sail and keep it trimmed etc. but it was pretty cool. 2 kayaks pulled up side by side and held on to eachother, we then pulled out a square sail about 2m x2m, with ropes off each corner. the front 2 kayakers held the bottom ropes, and the back 2 kayakers tied their ropes to the top of their paddles and lifted them in the air to catch the wind. i was in charge of our siamese sailing ship and thoroughly enjoyed the challenge of coordinating the efforts of 4 people to keep a sail up and full and taking us in the right direction.

kylie was in the front holding on to the sail and trimming when appropriate. she was a bit nervous at first as our guide had told her that if she let the front split apart then one boat always capsizes. our speed and the waves crashing over the tips of the kayaks didnt help either. once we got in the groove though, she fully enjoyed it, although sailing is hard work for all concerned. we got back to the harbour at around 14:30, having spent over 6 hours on the water.

speaking of our guide, he was a great guy named ben. he was a kiwi but had done 2 years of university to finish his degree at the university of alberta in edmonton!! he had also worked as a guide on the north saskatchewan river just outside of rocky mountain house, where i have worked as well. last (canadian) summer he was working in canmore and he plans to go back this year again. 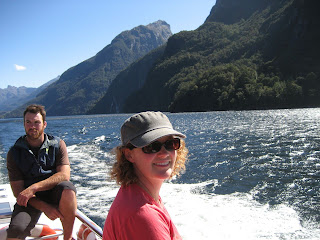 we had a great time comparing notes with him and listening to his stories.

overall it was a fantastic trip, with perfect weather, amazing scenery and a good group (kiwi guide, one other canadian girl, one german girl, one dutch guy and 2 austrian girls). kylie enjoyed being the fastest boat rather than the slowest. we have done a fair bit of kayaking now, in canada and here, and she is much stronger than she used to be (which is nice for me too!) 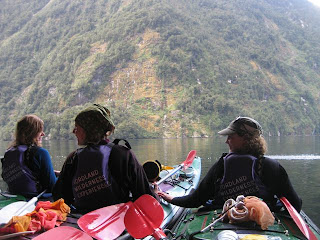 when we get around to it today, we plan to begin making our way back to the north tip of the south island, where we plan to do more kayaking and hiking and spend some time lying on white sandy beaches in abel tasman. until next time...
at 2:41 PM

There is a Deep Cove at the coast right? BC Coast? Anyway - I was thinking about the names people give to things. In BC we have Desolation Sound, and in New Zealand - it's Doubtful. Not very encouraging names eh? The kayak sailing thing sounds awesome!

yep, deep cove is just outside of horseshoe bay near vancouver, and in doubtful sound. captain cook was doubtful that he could sail back out of the sound b/c it was so protected.

sorry shareen... your blog has been gone for 2 months. before we left i took everyone off who had not posted in the past 3 months. a reasonable cutoff i think.