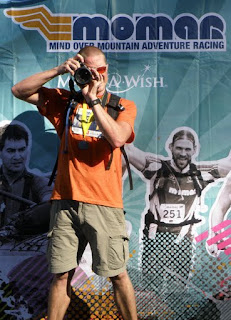 last week was that time of year again. time for marc to run, bike, kayak and attempt to get thoroughly lost in the wilds outside of cumberland BC, along with 359 other mildly mentally ill people running around in the woods with numbers pinned to their chests and straws hanging over their shoulders.

on the short urban course through downtown cumberland, a guy about my age with a big bushy black beard and a knee length black trenchcoat asked me while sitting on the curb, "what's up? are all you guys in jail or something?" 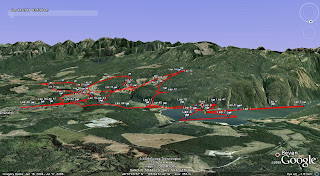 at 50km, the course this year was 5km longer than last year, but i felt much stronger and finished almost 30 min faster (what a sweet map of the course eh? thanks google earth and whoever made this map!) we started with a 10 km kayak, and in the tight starting rush i got knocked sideways from behind and piled into another boat and got turned around backwards. by the time i recovered i was solidly in the back of the pack, as the course designer reminded us every time we passed his boat. 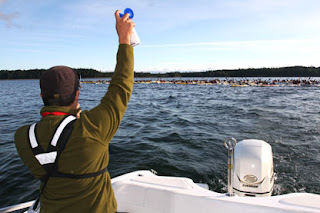 after the kayak was an unmarked trail run up a mountain and i was able to make up some time and pass a number of teams. the navigation was with a topo map and compass and i lucked into the second checkpoint ahead of a number of lost people. from there it was a lot of technical downhill running and i had a great time jumping off things. at one point i ran up a vertical wall ride meant for mtn bikes, using it as a superelevated corner. after calling down the hill for other racers to "hit the wallride!" and having a few take me up on it i felt i had to up the ante by taking 2 full strides up the wall and i leapt off about 6 feet in the air. higher than i anticipated but with a clean landing. knowing the cumberland trails a bit definitely helped my time on this portion of the race. 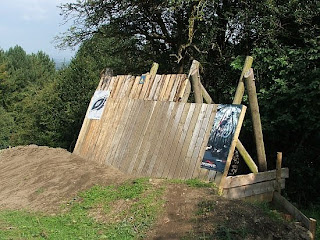 at the bottom of the mountain we ran along a bike trail into cumberland where we picked up our bikes. having decided on mostly liquid nutrition this year i took the opportunity to down one of my 3 ensure meal replacements (my stomach having learned to process this during my surgical rotation in medical school) and a few complimentary orange slices. with my adrenalin pumping and my blood sugar surging i saw a photographer at the transition gate and attempted to wheelie past him for the photo op. unfortunately i was stronger than anticipated and i flipped over backwards and landed on my back, scraping my right leg in the process, directly in front of the spectator gallery! i have not yet seen this photo posted on the web, but if i find it i will post it.

the mountain biking was certainly my strongest event and i gained a lot of places, despite having a flat tire at one point and having to change tubes on the fly. my pump wasnt engaging properly but luckily my friends trevor and matt happened by and lent me their pump. it was frustrating watching everyone pass me while i worked on my bike, but i had the satisfaction of passing most of them again on the downhill. i hit a few of the logrides and most of the drops but took it pretty easy as i didnt trust my little 2.1 tire to protect my last tube. this year the bikers were nicely spread out though, so i was able to fly without slowing down to pass too often. a big improvement over last year. 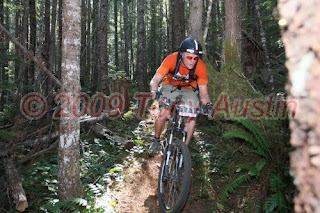 after the bike ride we ditched the bikes for a short run through town, just long enough to convince the locals that we were crazy, or escaped convicts, or both, then we jumped back on the bikes for another self navigated portion of the race up through some scrub and down a fast loose trail to get us back to the starting gate at comox lake. here we were given a detailed orienteering map and sent on a scrambling, bushwacking adventure to find 8 checkpoints hidden in the rocks and trees. i love navigating with map and compass on the fly and this part was seriously fun. 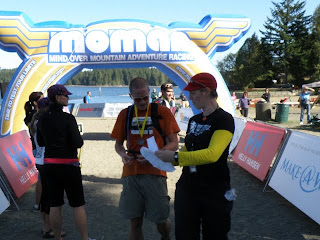 having found all 8 checkpoints i arrived at the finishline feeling great, and was happy to find my beautiful wife waiting to meet me! i knew my time was under 6 hrs this year, but i didnt find out until 2 days later that i got 23rd out of 130 teams, and 11th in the solo male category. my time was 5hr 43 min. i was thrilled with both my time and my place, as last year i finished the race in 43rd place with a time of 6 hrs 10 min. better knowledge of the terrain certainly helped, but i was also a lot stronger this year which was fun. my buddy matt bested his time last year by over an hour, so he was pretty happy as well. what a great day!

once again i was also very impressed with the town of cumberland. if an emerg position ever opens up in neighbouring comox, it is the town in which i want to raise a family.

speaking of great towns, kylie and i are currently in bend, oregon. we are here for a medical course as well as for the mtn biking. so far i can tell you that americans are very friendly and open, and that they have jazz piano players in the lounge in their hospital... chilliwack hospital doesnt even have a lounge! just some grungy tables outside the mini tim hortons. no piano player either, although sometimes i sing without realizing it.
at 11:02 PM

So proud of you Marcy boy!

hey you should connect with my buddy brett (of bike touring) in portland. he's there just starting and MBA in environmental management, has a mountain bike and might know some trails...

Marc, you rock! Sounds a little crazy and intense but I'm totally impressed!
Have you ever done geocaching with your love of navigating? I know, it's not quite extreme but still fun :)