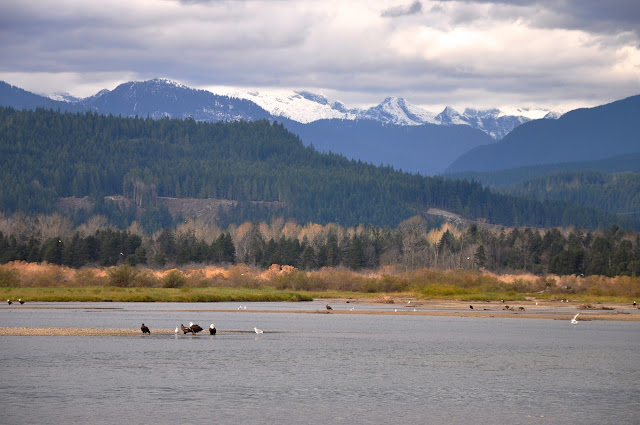 yesterday mike and i ventured out in our kayak to see the salmon party on the harrison river.  it's estimated that there are currently around 10,000 bald eagles in the valley containing the confluence of the chehalis and harrison rivers.  as the eagles flies, this area is about 4km from where i typically kayak, but it's on the far side of the fraser and we had to drive through aggasiz to kilby to get there, so it took about 40 minutes from our house. 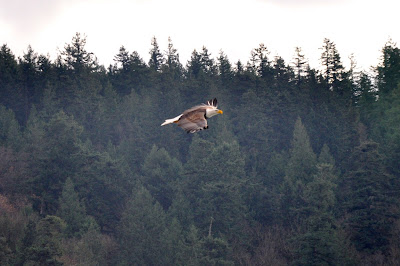 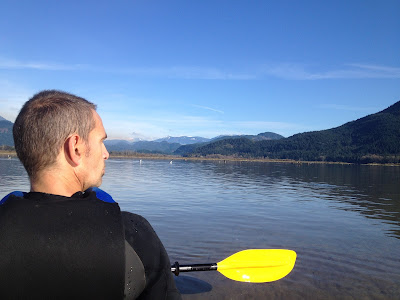 our morning was fasntastically sunny, and surprising warm for the middle of november.  the water was calm and there were eagles and swans and ducks and gulls and salmon EVERYWHERE. 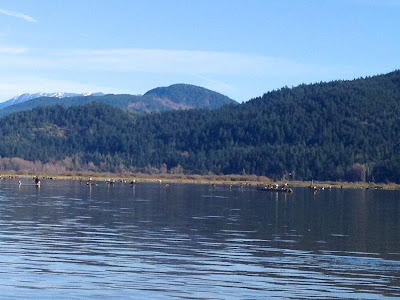 we had a bit of an ethical dilemma when deciding how close to get to the eagles.  too close and they all fly away.  too far away and i couldnt get good pictures.  is it bad to disturb them?  maybe not once or twice, but all too soon the tragedy of the commons comes into play. 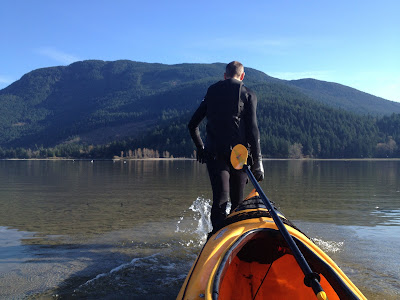 luckily the river took the decision away from us.  the chehalis delta was so shallow that we got hung up nicely away from the feeding grounds and mike had to tow us to deeper waters.  that's what he gets for wearing a wetsuit. 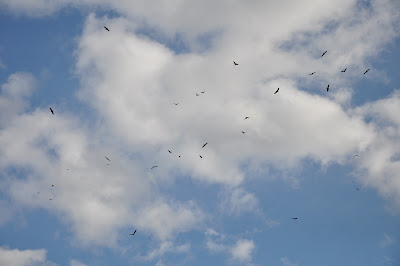 we crossed to a deeper channel and stopped for lunch on a sandbar.  there were eagles all around us.  the sky was alive with them, as were the trees across the river from our landing spot.  click on the pic below if you cant see all the speckled yearlings. 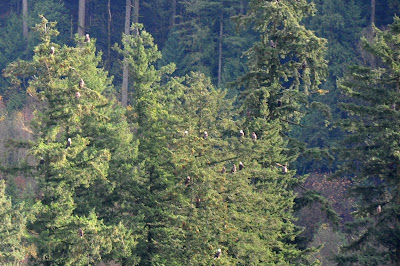 not since being on safari in kenya have i really lusted after a slick telephoto lens.  after seeing these pictures on the computer i wish we would have harassed these eagles at least once, nice and close. 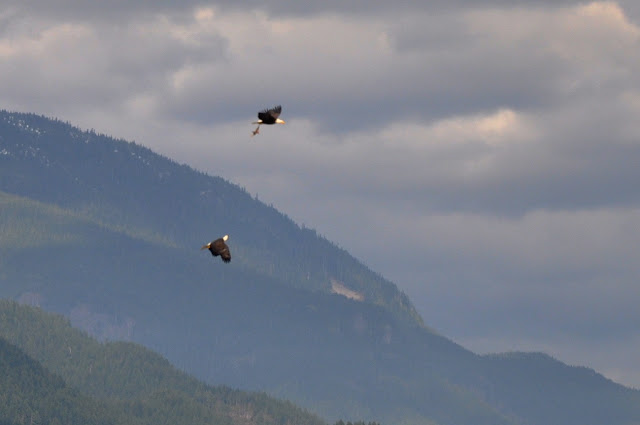 in addition to conversations on love and war, politics and religion, mike and i were witness to an aerial battle over control of some sweet fish guts.  the above birds stole that hunk of meat back and forth at least twice, right above us, before dropping it into the harrison.  you can see the bottom dude just starting to pull big G's up under his buddy.  amazing. 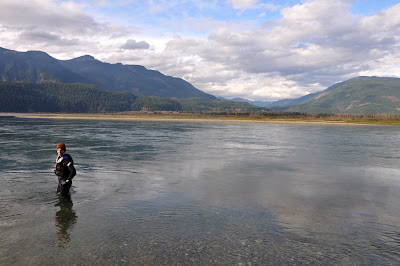 mike was feeling at one with the elements in his sweet coldwater surfing getup.  at this point he was considering jumping in the river and floating back to kilby without me.  his toque would have looked like a nice red spawning salmon, just waiting to be plucked from above, and patti and i have a deal where i get to borrow her husband occasionally as long as i return him in one piece, so i gently encouraged him to return to the boat.

incredible day.  awesome backyard.  as i type this i am looking out our kitchen window onto the same chehalis range.  i love chilliwack.  that being said, i should warn you that we are leaving for hawaii later today.  the fraser valley is nice and all, but it's starting to get a bit cold! ;-) next update from sunny kauai!

Thank you for taking me on this trip. I love your blog posts. Your are a terrific writer ; I know there is a book or two in there somewhere! Have fun on your holiday. Love from Aunt Cheryl

Caqn you tell your blog people that their id thing in the square is almost impossible to read? Aunt Cheryl

thanks aunt cheryl! i know, the word verification is getting pretty ridiculous. you feel like you're failing a minimental or something.

i took it off a few weeks ago and we got 3 spam comments within 2 hours, so it's here for a while unfortunately.