it is with great sadness and fond remembrance that i announce the death of our '82 volvo wagon. a car of great courage, endurance and moral integrity, the volvo has provided the bulk of the author's transportation since he was 4 years old. conceived in the demanding and safety concious hinterlands of forbidding sweden and birthed across an ocean in halifax nova scotia this sturdy beast of burden toiled tirelessly in the sole service of the greidanus family.

in her prepubescent chocolate milk brown factory stock phase she provided many hours of entertainment on family trips while riding backwards in the fold down rear seat. waving to tailgaters, pretending we were driving the car in reverse as well as generating a checklist of all the car parts we knew the names of to determine which was the reason for our backwards progress were all regular parts of my friends', sister's and my own repetoire of car games.

the volvo's adolescent years were marked by a radical molting to her mature shade of tahiti green. during her awkward phase she was often made fun of in the school parking lot and quite probably throughout the neighbourhood. in fact the author is ashamed to admit that he was briefly embarassed to be seen exiting the volvo and in fact was initially wary of driving her when he got his license.

the recently deceased reached her prime soon after being sold to the author by his parents for the sum of $1. she acquired a CD player, alpine speakers, subwoofer and amplifier, a new steel front skidplate, multiple decals and several strategically positioned dents in the undercarriage and storage compartements as well as bike tire marks all over the ceiling. she also came into her own athletically as she was coaxed to speeds in excess of 200 km/h on the straight and empty alberta highways and showcased her nimble suspension on the forest service roads of southern alberta and the east kootenays.

in her latter years the volvo moved to the fraser valley in british columbia where she continued her habit of accepting all loads and roads that were required of her. there she could be seen mixing amiably both with 4x4s on vedder mountain and sports cars in the doctors' parking lot.

the swedish pickup that had never once stranded its owner was able to muster the resources to die at the most convenient time and place possible for her. she was packed for a camping trip on the juan de fuca trail and family visit in victoria but on the morning of departure realized that the trip would be too much for her. not wanting to strand her owners and with the knowledge that they had over a week off to make funeral arrangements she waited until they were passing through abbotsford and 100m before the turnoff to her favourite local mechanic she gave a soft thumping gasp and began to spew pure white solid smoke out of her tailpipe. an initially minimal loss of power enabled her owners to abruptly change course and limp into her shop's parking lot where, after noting coolant sprayed across the engine and pulsing out of the block with every shudder she was pronounced dead at the scene. no resuscitation was attempted. cause of death was determined to be secondary to a blown head gasket.

the volvo was survived by her 2 owners, marc and kylie, and their dog niko as well as her adopted sister, a steadfast '79 chevette. condolences are extended to her initial owners pete and bette and their three daughters shareen, julie and carlynne. a memorial service will be held in chilliwack later this week. in leiu of flowers those wishing to extend their condolences are advised to consume a cold beer and spill a sip on a dirt road.

good bye volvo. we will miss your presence and cherish your memory. 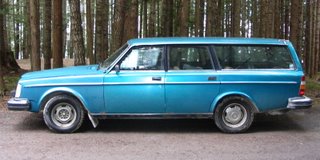 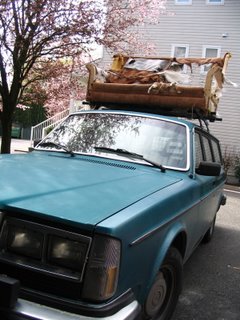 It sure is sad to see the Volvo go. Many a fond memory came from that vehicle. At least we still have one Volvo going strong in the Greidanus family (well maybe not so much going STRONG as just barely going).
May she rest in peace.
Julie

What a heartbreak to lose such a steadfast companion. Its good to know that she had a full and good life. We are definitely missing our volvo. They are indeed a class act. Here's to your 82, may she rest in peace.

Hey, I remember riding backwards in that thing too. My she have a good afterlife.

R.I.P. I have fond memories of riding backwards in the VOLVO at Marc's birthdays.

My Swedish friend's dad is an engineer at Volvo. Do you want me to forward this obit. to him and see if they can work it into some sort of marketing scheme?

My heart is saddened to hear of your recent loss. It will be hard to move on from here but I know you would honor your friend the most by doing so. Forever the faded batman logo will be etched into our memories as was in our friends rear window.

Goodbye dear friend you will be missed!

That volvo used to be the only way I could find your old house in Lethbridge. How will I find my way now, o beacon that lights my way???

May she rest in peace, great thighs of steel (not polycarbonate) and monarch of the tarmack. As we live on, let's not permint the nuts and bolts of our memories fade away. Here's a dribble for the road!

I am sorry for your loss...I will admit that was a vehicle I could always recognize here in the 'Wack. We're home from Van so call us and let meet up for some Indian food!!

While I am indeed saddened to hear of such an immense loss, it grieves me even more deeply to hear of a death at such a young age. Having been through a similar loss some time ago with my '73, I understand this pain first hand.
However, do not fret....as in the story of Jesus and Lazarus, not all is lost. A revival is possible! The head gasket is a worthy foe, but with the appropriate 10 and 13mm sockets, even death can meet its maker!
Or was it just the cost?
Nice car. There will never be a car as great as the 245.
volvoshredder

I want to know how many kilometers the 'ol swedish brick had underneath her. I miss my volvo too. I've had 2 and had to sell both of them. Alas, maybe I'll get another one someday. Nice choice with the Toyota, seems like a pretty good replacement.

WOW , I need to read your blog more often!
I'm sorry for your loss. She was good to all and will live on in our hearts.
I will down a beer in her memory, and spill the sip on the dirt road.
Congrats on the 4Runner. It's ok to move on.