in our time in kapsowar our surgeon bill has left 3 times and all 3 times i have been the doc on call while he is gone. the first time he left for the weekend and on the friday night there was a matatu accident, although luckily only 3 people were severely injured. the second time he left was for a wedding a few hours away and on saturday afternoon there was a matatu accident. this one was a disaster and you can read about it here. this weekend he has left to nairobi to pick up his son and i am on call AGAIN! it has been ok thus far, but i am just waiting for the matatu accident.

while i am on call and in a work mind set i thought i should tell you a little about my work at the hospital. yesterday i was rounding in pediatrics when a boy we were treating for pneumonia began cough/retching. he burped, looked a bit surprised and then this thing slithered out of his mouth. 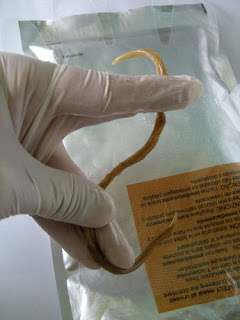 it is a roundworm named ascaris lumbricoides and he likely has a hundred of them writhing around in his intestines and who knows where else. large worm loads can actually cause something called loffler syndrome which produces shortness of breath and a diffuse infiltrate on CXR, both of which he has, but i dont think these evil little nematodes can account for his high fevers so i am keeping him on antibiotics. in fact high temperatures can stimulate the worms to migrate out of the body... the most typical places for them to exit are the mouth and anus, but given their propensity to wriggle through any little hole they encounter ascaris worms have been known to exit through the ear or eye!!! please take a second to imagine that... i think i may have kylie and i dewormed tomorrow.

yesterday in the afternoon i received a new patient on the peds ward who had been struck by lightening. he was in a coma and apparently had been seizing previously. the lightening entered his upper back and exited his right thigh, burning his lungs and intestines and giving his brain a serious shock on the way by. 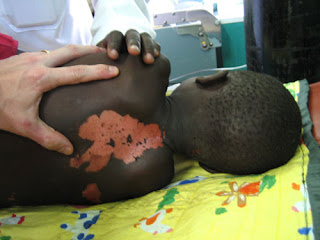 he is much more awake today and i think he will recover well, although i am sure he will sustain some lasting brain damage.

a little while ago i was working in outpatients when i saw a little 8 year old girl who had been sick for a while, but came in b/c she couldnt walk well. right away i knew something was seriously wrong just looking at her. during my exam i palpated the biggest spleen i had ever felt - it extended down from her ribs on the left to well past her belly button on the right. i also found big rubbery lymph nodes in every area i looked (neck, axilla, groin on both sides). i sent her for a workup at the lab and this is what her peripheral blood smear looked like (i am impressed that our digital camera took this picture through a microscope!) 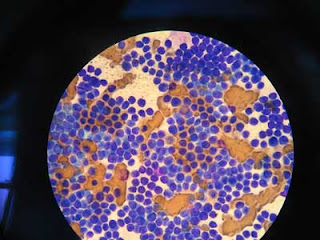 for those who are not familiar with peripheral blood smear analysis i will tell you that this picture is supposed to be full of little red life boats, with the odd purple round thing in every other field. the lifeboats in this picture have lysed over time, but the little purple things are lymphocytes (infection fighting cells) and when there are this many of them it is called overwhelming lymphocytic leukemia. basically this cheerful little girl's bone marrow is making lymphocytes and nothing else. we sent her to our referral centre for treatment but i havent heard anything back... most people cant even afford to be seen at moi referral, much less embark on a long and expensive treatment course.

on a more personal note, i have had a recent encounter with an insect known as the nairobi fly. these seemingly innocuous members of the beetle family are regular residents in our home and if we dont bug them they dont hurt us. but if you accidentally brush one or crush it they release a toxin that BURNS!! i brushed one off my chest the other night as i was falling asleep. i awoke in time to realize what it was and washed my chest and hand thoroughly, but i touched my face in the process and didnt realize it and now i am left with this: 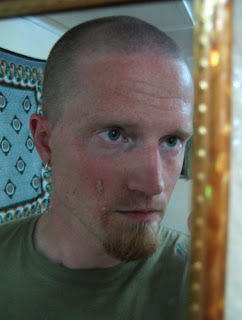 it actually looks better today now that the huge pustules have burst (and looked even worse the day before i took this picture - you know those pimples that are huge and fat with a micron thin layer of epidermis overtop and are just quivering to burst and release their pus into the world? this looked like that except 1cm by 3cm), but these burns can last months and even create permanent scars, so i think i will be sporting this facial exclamation mark for a while. we actually determined that kylie's rash of 2 months ago was due to the nairobi fly as well, and her lesion is as red as ever, although hers was much larger than mine.

you might be asking yourself how can marc deal with the stresses of the hospital and various skin lesions at home all put together? well, my ring worm has healed quite nicely although my thumb is still scarred, so that's ok, but mostly its because when i come home from a difficult day at work i am greeted by this: 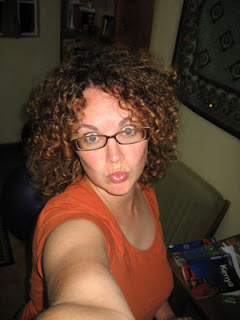 although occasionally when both kylie and i come home from a tough day i am greeted by this: 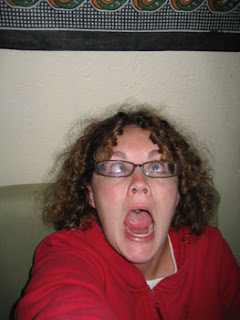 AWESOME POST!!
Those worms are nasty looking and I can't believe that boy survived being hit from lightning. I"m even more surprised that the lightning didn't break the skin.
Ok, now the girl with the spleen. If her spleen is that enlarged, would it not be removed?

I love your medical posts Marc. They're so fascinating (and even make me gag sometimes (i.e., the worms. SICK.)).

I would be happy to come home to someone like Kylie too ;)

Please get yourselves dewormed and de-whatever-else-you-need-to-in-order-to-come-back-in-one-piece.

perhaps this post should have come with a warning? I am suffering from insect hypochondria lately...a girl I know came to work with sand flea bites and now I'm convinced I have them and now I know the next zit I get is going to be from a nairobi fly.

You both look fabulous, keep safe.
Love you.

Hello! First let me say again, that you two are the funniest people I know and I could sit for hours and read your posts. Secondly, I agree with Shareen that you should have warned us, because I nearly died...how will all the other worms escape?? Will you take them out?

I showed these pix to my students today to get them fired up about biology. There faces were trying to turn away but they couldn't help but look! I've *started* my blog... rhys-brown.blogspot.com check it out.

Marc...i don't think i will ever look at a bug the same way. And, I am not sure i ever want to go to Africa again! I think it is much better not knowing about the creepy crawly things that lurk about. Thanks for keeping everyone posted- we often come to your blog for entertainment- never a dull moment from the you guys. Take Care!