Marc and I just got back from a whirlwind trip to Nairobi. We found out a couple of weeks ago that we would have to head to Kenya's capital because Marc's work permit had not come through and if we wanted to continue to stay in the country we would have to go and re-new our Visa's in person and get fingerprinted. (I was not very good at the finger printing, the lady had to keep telling me to relax and then she told me it was a good thing I wasn't a carpenter, not sure what she meant by that, maybe she thought I would be the tense carpenter who always hit my thumb with the hammer.)

Luckily this trip also coincided with my mom's departure from Kenya so we were able to see her off. Before she left we visited the baby elephant orphanage. awwww 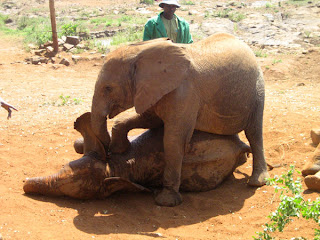 Everyone here who talks about Nairobi talks about it as the awful dangerous, crime filled place and while I know that Nairobi is not the safest place in the world and that you should not go out at night, I was pleasantly surprised by the infrastructure downtown, all the parks and how clean it was!! Kapsowar is definitely not the cleanest city around with no system of garbage pickup there is garbage all over the town centre that occasionally gets burned. (Which tends to give off the most appealing smells! Last week I also saw some chickens eating some burning garbage, they didn't seem to notice it was hot. hmmmm) Anyways, that long run on sentence was there to inform you that Nairobi (at least downtown) is an extremely clean city. (Even cleaner that Paris!) There are garbage cans everywhere and absolutely no garbage on the street. In the parks there are many LARGE signs saying that if you litter you will immediately be arrested and prosecuted by the town officer. There's some motivation! Here are some pictures of our trip: 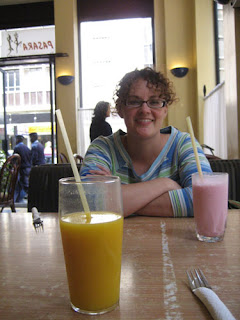 I have been craving sandwiches ever since we came to Kenya. We stopped at this cafe in Nairobi and had great sandwiches and some amazing drinks. Marc had mango juice, note his straw sticking straight up in his juice (it was so thick!) and I had a strawberry milkshake. mmmm 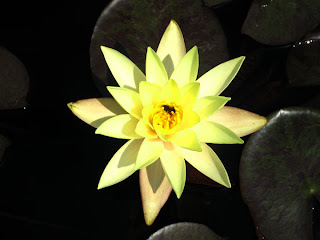 A flower in a lily pad pond in a park. There was a pond absolutely FULL of these flowers and there bees in a lot of them. 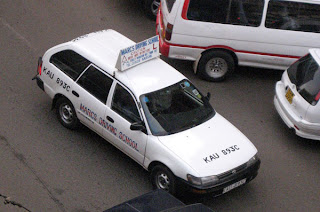 It's Marc's Driving School! I don't think Marc could teach anyone to drive in downtown Nairobi, it was so crazy! There are traffic lights but no one follows them. On a side note, recently a traffic light was put up in Eldoret (the nearest city to Kapsowar) but it lasted all of one day. Instead of creating order it created absolute havoc because no one knew what to do so now it just hangs lifeless on the main road. 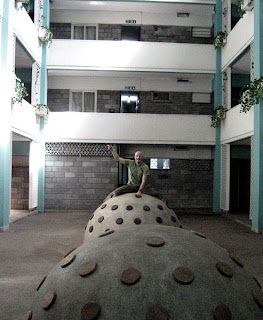 Some very strange orbs on the main floor of our hotel. They look like they used to be lights but now they are there for crazy tourists like Marc to ride. 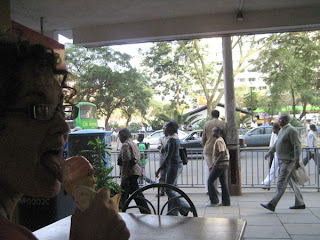 Oh the joy. Ice cream for the first time in many months, eaten at the Creamy Inn, located next to the Pizza Inn and the Chicken Inn. 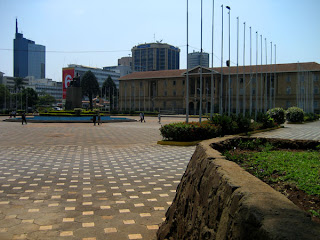 On the grounds of the Kenyatta Conference Centre.
Civic Square.

We also tried to get in to watch a session of Parliament but unfortunately the men needed to wear a collared shirt and tie and since Marc does not have any ties we were not allowed. Maybe next time. We did see a man wearing a very cute tie of Santa golfing on the North pole so maybe we can find a quirky one to go watch the MP's debate next time. (But no clapping!)
So that's it that's all folks. Have a good day!
at 11:06 AM

Looks like a fun trip! All the pictures are great! Is it pretty hot there right now? When do you guys come home?

Hello Miss Heidi, it was a fun trip and actually it is freakin' cold right now in Kapsowar. About 13 degrees most days. I miss summer! We aren't sure when we will come home, we'll be in Kapsowar until about November and then we are planning on doing some traveling and then maybe home sometime in February. Are you going back to Thailand anytime soon?

I`m headed back there today--right now I`m in Japan killing time between flights. Thank God for free internet. Great pictures of Uganda--be careful and have fun! Say Hi to Chris too!