we have had a few interesting examples of severe nutritional deficiencies with happy endings here in kapsowar recently. 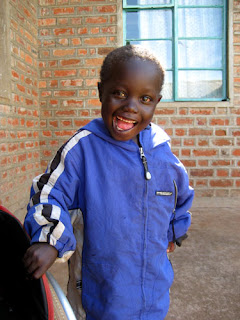 one is a patient who is now well known to everyone in the hospital. when gideon arrived he was close to death. his mother had left the home and he had spent much of the previous year neglected in the corner of the family hut. when he was finally brought to the hospital his heart, lungs and kidneys were all failing, his entire body was swollen, he was partially paralyzed and he spent most of the energy he had screaming whenever anyone came near him.

after treating multiple problems, we realized that his main problem was something called beri beri, caused by a lack of thiamine in the diet. his therapy had 2 major thrusts: the first was medical and involved supporting various systems while supplementing him with thiamine, the second involved the commitment of 2 volunteers from the US, alice and natalie, who spent a good part of every day playing with gideon and mobilizing his contracted joints. in addition to their efforts, most of the staff in the peds ward payed this little boy a little extra attention.

gideon was admitted for almost 3 months, and because his family could not pay the montrous bill, he was kept for a further 2 months. during that time he experienced a miraculous transformation. he went from a huddled weeping wailing invalid to a little 4 year old ball of social energy! anyone who walked by the pediatric ward was gideon's friend. if he saw kylie or myself walking up the path he would stand up and begin to wave frantically, then at a certain distance he would lean forward and just as he was about to fall on his face he would propel himself at top speed towards you like a miniature linebacker.

gideon finally went home 2 weeks ago. his physical transformation was interesting to see, but the psychological one was miraculous. from his initial reclusive angry state, through the love of many different people, he became the most gregarious precocious kid on the ward. his lopsided smile (a reminder of his previous hemiparalysis) will be missed throughout the hospital.


the second patient, jebet, came to the peds ward in a similarly critical condition. one week previously she had been alright aside from a case of epilepsy and a slight scaly rash. over 5 or 6 days the skin on her hands, feet, shins, arms and neck just peeled off, leaving a shiny pink and white area of "burn" in its place. 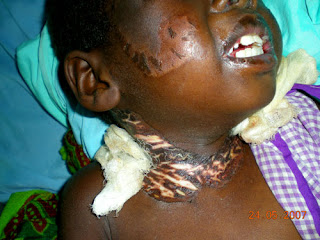 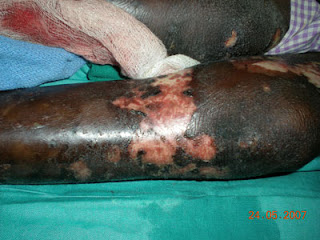 after initally treating her for several things at once we centered on pellagra, a deficiency of vitamin B3 (aka nicotinamide, aka niacin, aka nicotinic acid) common to people who eat primarily maize. in all our pharmacy's supply of dietary supplements, both oral and intravenous, none could be found which contained vit B3. finally, the medication i ordered for her, and the one that solved her problem, was a simple Centrum multivitamin that someone (perhaps myself) had brought from north america.

unfortunately, her right wrist was so far gone that her hand was amputated, but 1 month after coming to our hospital and being near death, jebet is smiling and happy and almost ready to go home. she used to hate me for torturing her with debridements and dressing changes and serial examinations but now she will even smile for a picture! 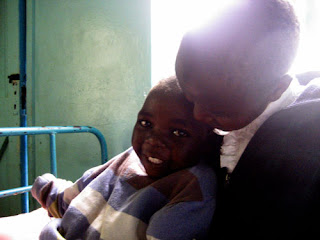 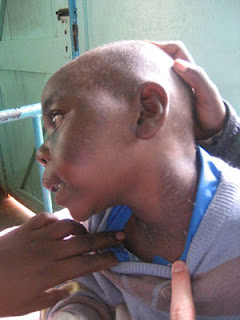 a third example of nutritional deficiencies hits a little closer to home. our diet here in kapsowar is radically different, but i didnt realize how much it was lacking in essential brain nutrients until kylie devised this helmet to ward off the antagonistic aqueous animae. 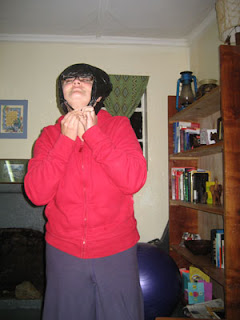 luckily cherri brought us our own bottle of centrum multivits, so kylie is back to her normal entirely rational completely serious self.

Wow, it would be amazing to witness that in such a deprived country.

Those stories are so amazing. Way to go! That little Gideon was super cute too.