Our friends Chris and Rachel arrived in Kapsowar last Monday evening in the middle of one of the worst rain storms we have seen (heard? felt?) since we have arrived in Kapsowar. We received an e-mail from Chris at 4pm saying they were in Eldoret. At around 4pm an absolute DOWNPOUR started in Kapsowar and did not let up at all for the next three hours. We decided there was no way that the matatu could make it to Kapsowar on the mud roads so they would be spending the night elsewhere. To our great surprise we received a phone call at about 9:30 saying our visitors were waiting for us in the Outpatient department. 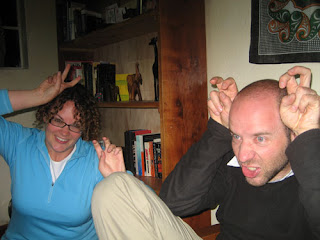 I have become a "hand quoting" machine since Chris and Rachel got here, not sure why but they bring on the annoying hand quotes in me.

We have had a great week so far, visiting with Rachel and Chris, eating A LOT, and doing a few little walks. (Mainly Chris, Rachel and Marc, I have been a bit sick this week. Today they are going up Kipkener and after the last slog I decided that maybe it wasn’t the best thing to do with a sore throat. I’m sure Marc is happy that no evil eyes are boring into his back.) 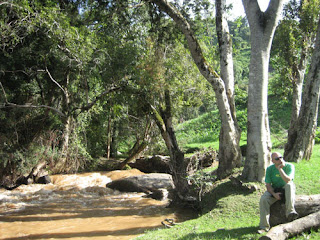 Chris by the river on the walk he and Marc did yesterday.

Rachel has also been busy this week working in the maternity ward as a mid-wife, she has been thrown right in and is quite enjoying herself. Chris has been busy eating mendazi’s and chai at the local restaurant, going for walks and bike rides, practicing his Swahili and fixing things for me like my watch. 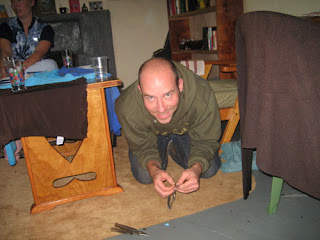 Rachel also got her hair braided by Risper yesterday and after a 7 hour marathon yesterday I must say it looks amazing! We had many visitors yesterday (hence one reason for the title) as she was braiding. Juliana and Chara came over to check out the process, Benjamin and Abraham came over to discuss the logistics of climbing Kipkener and to check out our sunflowers. Later in the evening we had a Canadian party (not too much Canadiana was in sight, just all the Canadians on station minus Daniel and Deng.) 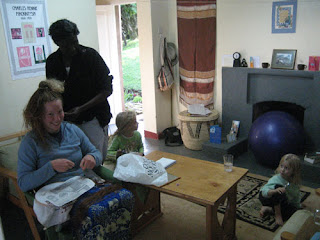 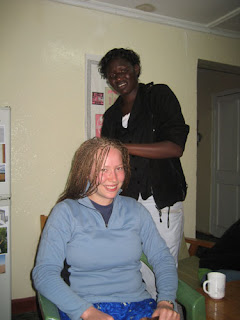 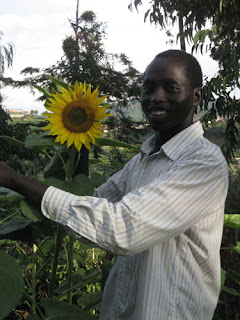 This week we also celebrated Marc’s 29th birthday!! Can you believe that? I certaintly can’t, lucky for me I’m a young buck and mine doesn’t come for another six months. ;) While there aren’t too many special things to do in Kapsowar (last year we went to Cirque du Soliel) but I did make a special dinner of homemade hamburger buns (yes you read that correctly, it says homemade) with of course hamburgers and bacon and potato salad. We had nummy cake for dessert. We finished the cake off the next night at the Larson’s where Marc was showered with cards, presents and balloons by Chara and Juliana. 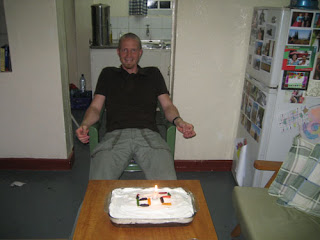 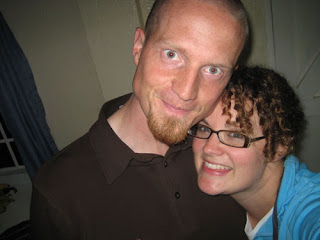 Marc and I were both commenting last night that he looks a little emaciated in this photo. Don't worry you at home! It is just the angle, besides who could be emaciated after a dinner of hamburgers, bacon and potato salad!! 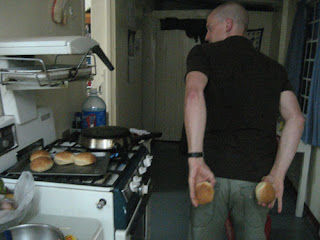 Marc and "my" buns! (Lucky for you, you didn't have to see the hand quote!)

We are off to Uganada with our visitors and then we will be back here for about 10 days and then my dad arrives. We will be going on safari for a week and then in another three Marc’s sister and parents arrive. The lovely Joshua (do you mind that adjective Josh?) says he also might come by for a visit mid August. WHOA! Now do you fully understand my title? ☺
at 12:34 AM

Whoa! 29!! HAPPY BIRTHDAY You have now joined me. Although, I will be tunring 30!! in September. Too soon. Enjoy the LAST YEAR of your 20's aaaa haha hahahaHHAAAAAA (insert evil laugh)
I wish I was visiting. Alas. I leave for Baffin Island in 24 days. I'm looking forward to the supreme extreme remotness (even though there will probably be plenty of hikers due to the time fo year). We will attempt a climb to the 1675m peak of Mount Thor via the back side. I'm not quite ready for the 1.2km shear cliff of it's NW face. We may have a pitch or two of vertical wall to do at the top, of course, but being within the artic circle and days away from help, we are not attached to the summit.
Lots of Love,
J