yesterday we drove out to explore jones lake. we had never heard of it... i just saw it on the backcountry map we bought on arie's recommendation. it was amazing though. if a lake like that was 30 min from lethbridge it would be THE destination but this is chilliwack and we had the whole lake to ourselves, although we did see a parked truck. i guess the road up was a little rough. there are so many little lakes around here though, that perhaps all the people are just well spread out. 3/4 at cultus lake and the other 1/4 scattered around the other 50 lakes a little further out or only accessible by 4x4 or hike in. since we bought the 4runner we have also visited foley lake and williamson lake and tried and failed to find the trails to lookout lake and sunrise lake. 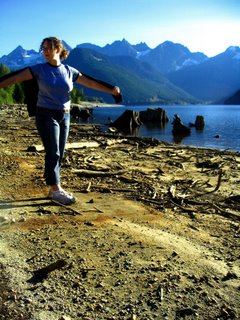 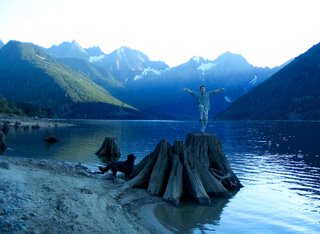 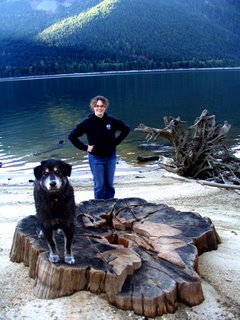 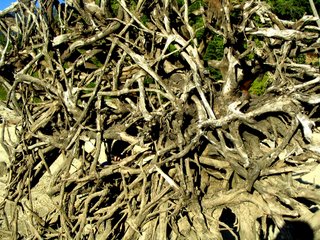 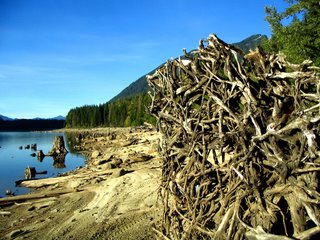 on a related note, we have been cushioned from the fiscal reality of owning an suv by the recent low in gas prices. kylie and i were wondering about this sustained dip and we think it is b/c of the US election. the who's who of petroleum pricing dont want the electorate to be too pissed at the republicans right now. like any good theory this one is able to generate predictions which can then be tested. this particular theory would predict that oil and subsequent gas prices will stay at a reasonably low level until after the election at which point they will head back up. i am not the first to make this prediction but i am the first to make it on this blog. if we are right it further underscores my conviction that commodity prices are not quite as much about supply and demand as we have been led to believe. and if the value of such a tangible and practical resource can fluctuate according to the whims of international dictators and intranational moneymakers, how much more flimsy is the value of a corporate entity that has no existence in the physical plane beyond 1s and 0s on a magnet, ink on paper and variously weighted synapses between neurons in the tangled neural networks of the brains of the employees and shareholders? make sure to maximize your rrsp contribution this year. oh, did i mention before that you can purchase christian mutual funds? i'd love to sit in on one of their meetings of moral mathematics.
at 12:50 AM

You can find out some trail info on www.bc4x4.com in the message board, Trail talk section.

You'll also be able to get advice and parts for your Toyota and a (somewhat frightening) insight into Westcoast Redneck culture at www.funinbc.com

Absolutely love this lake!! Could we go there on my visit?

perhaps the supply and demand of a different commodity? surely a commodity that is easily bought, if you're right.

I can see what's next. A wench strapped to the front bumper. I mean winch!

now who would that wench be kind sir? k

Sparks, ment wench for sure!

Hey your crane kick technique looks good, warming up for the all valley karate kid turnament Dec 19th I see.