10 Random thoughts about winter during the aftermath of a Blizzard

1. I love having so much snow! I much much prefer 30cm of snow to pouring rain. (Granted, it is -1 here and not -35.) Marc and I have had so much fun in our snow dump. Yesterday we went for a walk with Niko in the blizzard and had a great time trekking through knee deep snow. We came home and made feta cheese bun pizzas and apple crisp for dinner. Why is it when it's snowy and cold we like to eat cheesy, fatty, warm foods? We watched the movie CARS while we ate dinner. It was really funny! After the movie I decorated for Christmas. Our living room looks so fun and Christmasy. I wish we had our camera. Soon. I hope.

2. Marc's parents were here this weekend and they showed us how to use our gas fireplace! Marc is not going to like this line, I should revise it and say that we know how to use it but we just don't but we had it going all weekend and I love it! It's going to be on all the time from now on. 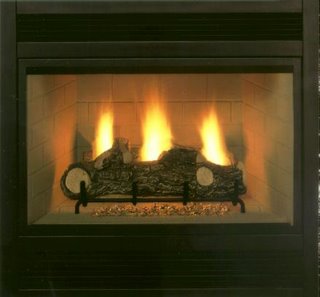 3. One of my favourite Christmas songs is Jingle Bells by Barbara Streisand. Marc and Shareen both said it's an annoying song but it just makes me want to bounce and dance and shake and do all things associated with being in the Christmas spirit.

4. Niko had come alive in the snow. Now some of you who have met Niko will say that Niko is very much ALIVE and kicking! (Especially if you are one of those who Niko has jumped on.) But he just looks so happy bounding through the snow and stuffing his nose in deepdrifts and then taking his head out and shaking all the snow off. He also apparently does not like it when we slide down hills. Yesterday on our walk Marc and I were sliding down the hills our walk and Niko would run beside us and grab our hands and try and pull us. This usually just resulted in him pulling our mittens off. I have no idea what his intention was but it was really funny to see him go after Marc. It wasn't as funny when he went after me. We also found out that Niko really doesn't like it when you fall in the snow and will run to your aid immediately. Today when he started to chase some toboganning children I was afraid that he was going to go rip their mittens off so I yelled Niko and fell down in the snow. He ran like his life depended on it. I am not sure if this trick will work on dry ground but my fall will not be as soft and people may think I am a little strange. 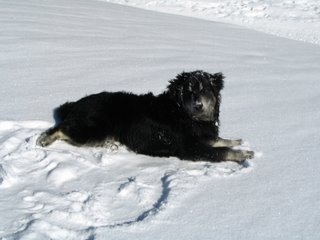 5. Walking in the driving snow yesterday reminded me of a story from high school. When Marc and I were in grade 11 and he was I believe dating Lisa and I was in high school love with him we went toboganning for my birthday. After toboganning we were suppossed to go to my house where all our other friends were going but Marc convinced me to stop in at the Legg Christmas Party first. (My mother got mad at me for leaving all my friends at my house by themselves and I didn't understand why she would be upset. Hello! She was home. Now I understand. Sorry mom.) Anyways I asked Marc before we went in if I had any mascara on my face. We had been toboganning and it had been very wet but he told me I looked fine. So we went in and talked and chatted and met people and then on our way out I caught my reflection in the mirror - I had mascara lines all the way down my face! This was no little under the eyes blackness this was full on lines all the way down my face. I was mortified! Recently, I brought this up with Marc asking if he just couldn't see the lines because I did ask him in the dark but he said he just thought it would be really funny if I went to a party with mascara lines down my face. And I still married him!

6. Here are some pictures from Marc's parents visit this past weekend:
We went to Craig's basketball game and he gave Marc these EXTREMELY loud noise makers. 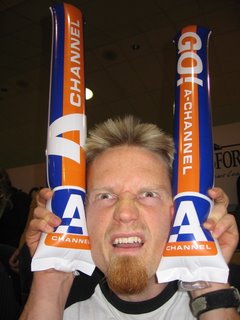 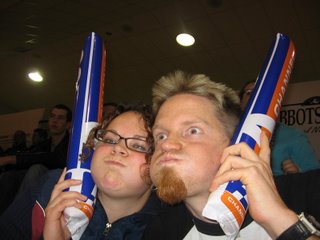 We also went for a walk up Seven Sisters and Shareen took these great shots after on the dock at Cultus Lake. 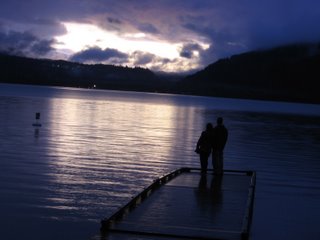 We also went up Mount Thom with Bette's cousin Gerry. Niko sure likes to catch snowballs in his mouth. 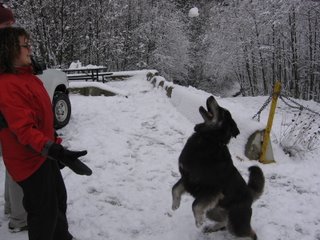 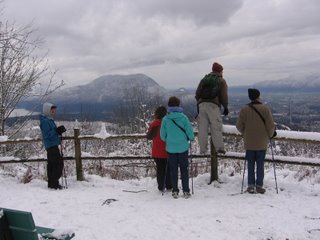 Marc's dad walked up with his ski poles but it looked like he had invisible cross country skis on. 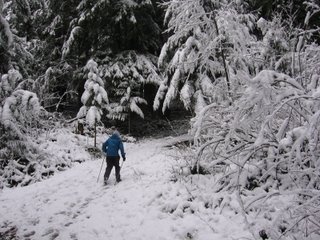 Shareen took this awesome picture! I hope she doesn't mind me showing it. 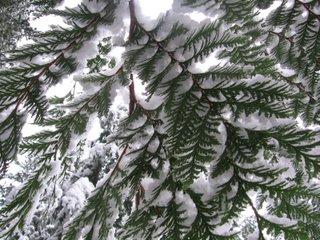 Shareen and I made a snowman with a hat then I smashed it. hee hee 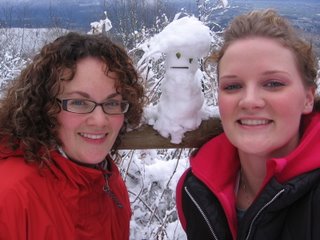 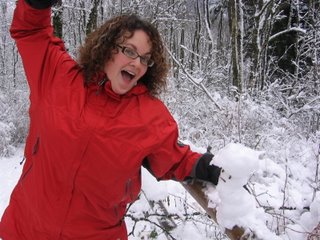 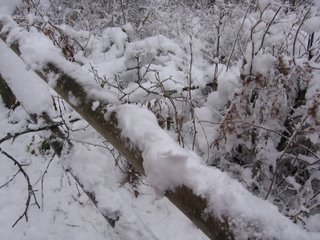 7. While we were enjoying a nice cozy evening here in the snow, Marc's parents and Shareen were driving on the crazy highways to Victoria! They made it safely okay after a 3 hour drive to Surrey and a four hour wait at the ferries. I'm sure Shareen will blog about their crazy adventure.

8. I love 4 wheel drive! I quite enjoy driving through snow drifts with big grippy tires. I also love lock de-icer (and the man who gave me some in the Save on parking lot today, well I don't love him but I appreciate him.) I couldn't get our locks open after picking up a gingerbread tasty latte on the way home from my walk with Niko today. As I was just about to crawl in the back with Niko and try and reach the lock through his puppy gate a nice man came along and just handed me some lock de-icer. How did he know what my problem was I asked. He said I was about the fifth person he had given it to this morning.

9. A quick poll (if you have gotten to number 9!) How many of you think that the "Santa" in the song, I saw mommy kissing Santa Claus is the dad, or is it actually Santa? I always thought it was Santa until recently when several people on several different occassions have said it's the dad. Hmmm, let's weigh in on this Christmas mystery. 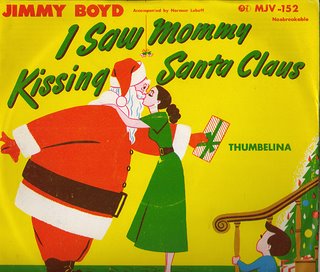 10. I should have called this post 10 random paragraphs (or small essays) about winter in the aftermath of a blizard. If you are someone other than my mom or dad I congratulate you for reading the entire post! Good job!
at 3:47 PM

Well I guess I don't get any congratulations. I did read it all. And I enjoyed it!
Love Dad

I congratulate you too! Thank you for reading AND enjoying it! Love, Kylie

I read the whole thing too. And I have no idea who the song is referring to. I tend to take things literally unless I have a compelling reason to do otherwise, so I vote for Santa!

shelley's thoughts:
1)cold weather makes people want to eat cheese
2)if you ever need a dog sitter, let me know
3)you didn't know how to turn on your fireplace? *snicker snicker*
4)i can't believe you killed the little snowman. I feel so sorry for him.
5)of course marc didn't tell you about the mascara lines. It's WAY more funny that way. And look...now you have a great story to blog about years later :D

Liam and I enjoyed your post about the good things about snow but right now we're in Edmonton and snow is not that fun at minus 40 with windchill this morning! We'll see you in a few weeks!!

I read through it all and it made me:

- think about the possibilitiy that it wasn't Santa...it now makes sense to me that it may be the Dad

- kind of want to cross country ski...but with real skis

- want to drink egg nog...not really related but I am being honest here

Kylie,
you left a comment on my blog today and somehow it got lost when i made some changes to my blog. My apologies. And to answer your questions, i did eat cheese today and it's a great snowday for me, too.

Your blog made me really miss snow-thanks for the little taste of winter.
Also, I laughed and laughed about the mascara story! Sounds like Marc to me.
And finally, I have always assumed it was the dad dressed as Santa. Otherwise, Mrs. Claus should find herself a good lawyer.
Heidi :)

I read through it all too... although i did skip the Niko paragraph... sorry pooch!

And yes I must say I always thought she was having an affair with Santa Clause! Thanks for clearing things up!

Hello to Marc and Kylie from old Edmonton friend Nicole! Renae told me about you seeing me on her blog so I thought I'd check yours too and say hi. Looks like you are both well! That's great. All is well here. Is it not a small world or what? I couldn't believe that crazy connection! Later skaters! Nicole

Hi, I love the pictures you posted. I guess I've never thought about it, but I would have to say that it is the Dad that Mommy is kissing but it would be quite shocking to a child if you saw your mom kissing Father Christmas, a possible affair that perhaps only occurs once a year.
You also made me wish for snow and made me miss the days of tobogganing. I have a tobogganing story that I'll have to tell sometime.

NICOLE! fantastic to hear from you; thanks for checking in. i hope things are going well for you in red deer. you look great with long hair!

michaelia - please do tell us your tobogganing story. do you remember all piling onto a tractor tube and sliding down the coulees right onto the off ramp to scenic drive at our class xmas party with dk?

and thanks to all of you for weighing in on the santa/dad question... i had a tough time even getting kylie to consider the dad option. thankyou nancy for joining kylie in her public naivete.

lastly, heidi what are you doing for christmas in thailand?

Okay, evil twin. I am with you on the dad vs santa thing. I always hated that song because it seemed sort of... I don't know. I'm so relieved.

Christmas in Thailand...I'm sad I won't be home to hang out with my family, but I'm excited to explore here a bit. I'm taking an overnight train to Chang Mai to trek to a hill tribe-elephant ride, bamboo raft, etc. Then I'll fly down south to rock climb, sea kayak and snorkle etc on the beaches. Hope to avoid the building sized waves of a few years ago.

What are you guys doing?