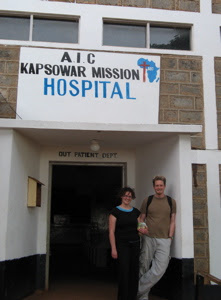 last weekend i was supposed to be on call, but paul requested a trade so that he could attend the wedding of our nurse anesthetist, hosea (a slick anesthetist BTW - he can put in a spinal as fast as i can throw a dart in a dartboard). at the time i joyfully accepted, although i was a little jealous when i heard that he slept through 2 out of 3 nights. during the week however, it slowly dawned on me that he was not the only doctor going to the wedding. all the docs at the hospital, including our surgeon, where planning to attend. also, our new sudanese interns had not yet arrived and our 2 current medical students had both been on call with paul. this critical concatenation left me running the entire hospital by myself.

being a bit concerned about this realization (and fairly new to doing major surgery on my own) i consulted with the hospital administrator and it was decided that the hospital would hire a kenyan medical officer to help me with the ward rounds and back me up on surgery. this made me feel much better until i found out late friday that the kenyan MO had a conflict and could not make it out. my friend mariciana felt sorry for me and offered to help me with ward rounds on saturday morning before she left for the wedding. ok, i thought... i can do this. this is part of the reason i came to kenya, to be thrust into situations where i am uncomfortable and learn from them.

after a full and stressful week of working on peds and maternity i had a fairly busy friday evening. i managed to make it home for dinner but then got called back to the hospital to deliver a baby or 2. i got to sleep around midnight and woke up to do an emergency c section around 2am. after that there were a few ladies to assess and a newborn to resuscitate, keeping me up until a little after 5.

the next morning i was lucky to have our brand new med student pak-ling from singapore on call with me. med students are not supposed to take call in their first few days here but there was extenuating circumstances. with mariciana and pak-ling helping me with rounds i thought things would go smoothly but i was wrong. after every 2 patients i saw, a nurse from maternity would come and call me out: "there is a lady delivering twins" "we have a new admission who is not progressing" "we have a pregnant lady who is unresponsive" "we have a new baby that isnt breathing" on and on and ON! we have only been here 2 months but i have never seen maternity that busy.

i finished rounds in the early afternoon and ran home to eat lunch, however after my second spoonful of soup i was called back to resuscitate a baby (the third that day). the baby was (and still is) quite sick and 1 hour later i was still bagging when a flustered nurse ran into the labour suite. "are you the doctor on call today?" yeeesss... "for the whole hospital" yee-essss.... "including surgery?" uh huuh... "well then come quick there has been a terrible accident and many people are hurt!" uh oh.

i walked quickly up to the operating theatre (leaving the baby with the nurses) and opened the door to total chaos. our theatre triage area was packed with patients and nurses. there were people on every stretcher and 2 on some, a guy having a seizure on the ground, kids screaming in the corner. chaos. there was blood all over the floor and people with grossly deformed limbs moaning and writhing back and forth. i froze briefly at the sheer volume of patients, not knowing where to start but then sprung into action. my first order of business was to instruct pakling to phone our medical director steve who had luckily stayed home sick from the wedding. 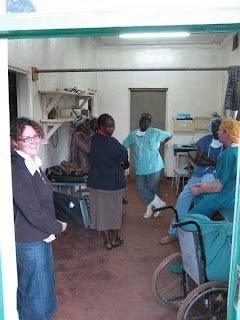 imagine 10-14 wounded patients and 8 staff in this room - occupied in this picture by kylie, our surgeon bill, a new sudanese intern named moses, wilson the OR guru and several unidentified patients
by the time he arrived i had a rough idea of what every patient's problem was and whether they were stable or not. steve was able to take the sickest patient (the guy seizing on the floor) into the theatre to treat him and i was left to deal with the rest. in retrospect i am glad this happened after we have been here for 2 months b/c at least now i know the nurses' names and how to take a basic history in swahili:
"veronica, start an IV here and bolus 500 NS" "mercy, get me a blood pressure" "una ujungu wapi? happa? happa?" "wilson, get to pharmacy and bring me all the IV cloxacillin they have" "una pomoi mzuri?" "no peter, THIS man needs xrays first!" "bwana BWANA! una etoi nani? bwana!"

with the help of a very competent OR staff in about 7 hours we managed to get everyone stabilized, the seizing patient to eldoret, the fractures reduced, the lacerations cleaned and stitched, the labs done and the children calmed. paul had heard about the accident and pinned it back from the wedding in his land cruiser, so he was able to help see some of the patients who had been deemed not as severe and triaged directly to the ward. there had been about 25 people in the matatu which had gone flipping off the road (around here brakes are an optional feature) and all of them where treated in our hospital. miraculously no one died, but several patients still require surgery. 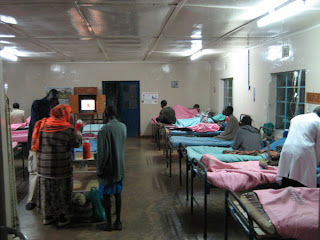 the mens' ward
just as i was washing my hands after stitching up the last patient in the theatre a clinical officer walked in. "i just wanted to warn you that i am bringing you a man who has been attacked by a leopard." ha ha... bad joke buddy... unfortunately: not a joke... actually: quite serious... luckily the leopard just jumped the poor guy and bit his arm and swatted him in the face and did not stick around to maul or eat him, but still a leopard bite can fracture an arm and lay it wide open, and a quick swat can (and did) tear some serious chunks from a face. 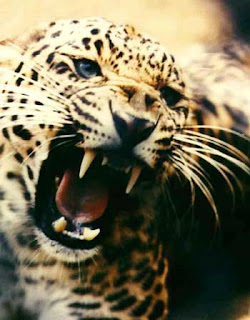 after resuscitating and assessing and irrigating and stitching and writing up the admission (which was subsequently lost BTW) i was finally able to go and round on the patients i had stabilized and sent to the wards. at this point i could barely talk straight and was having trouble fathoming being on call for the entire night and all day and all night sunday and then going right back to work on monday morning (if i wasnt still at work). it was at this point that saint mariciana volunteered to take my night call for me so that i could get some sleep to face the rest of the weekend. thank you mariciana! you are the reason i am awake enough to type this story right now. 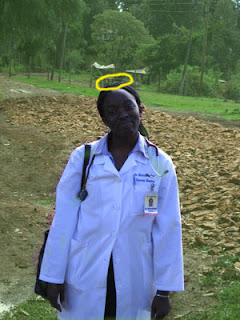 Oh my word. If you weren't a super doctor already, you sure are now. I must admit my swelling pride due to the fact that you are indeed my brother ;)

And look at the positive side: at least these crazy nutso experiences give you captivating stories to write about!

Love you both,
J

WOW! That's a lot of action in a couple days! That is SOOOOO my cup of tea! I wish i was there to help.

Marc, I too,am very proud of you. I'm sure that it must have been one of those moments when you said to yourself, this is why I became a Doctor, and this is why I'm in Africa.
Love Greg-Dad

I'm also very proud that you used the word concatenation.

thanks for your comments guys.

and greg, you were very close. what i was actually thinking was
something like, "why the heck did i become a doctor and why the heck
am i in AFRICA?"

Quite the weekend Marc! I don't know if Mariciana is a Saint, but she certainly is an Angel!
Love and prayers,
Dad

julie, thanks for posting my comments but what I actually meant to say was:
"why the HELL did i become a doctor and why the HELL am i in AFRICA?"

Julie's version sounds more appropriate for a man just rescued by a Saint!
Mum and Dad

wow.
i'm here via lowell & julie's blog -- what an amazing few days.
well done. although that doesn't really say much does it?