Jerusalem Gold was the name of our hotel when we stayed in Jerusalem previously and I thought it would be a fitting title for this post, as you shall soon see. First off we went to the very GOLD and shiny Dome of the Rock yesterday. 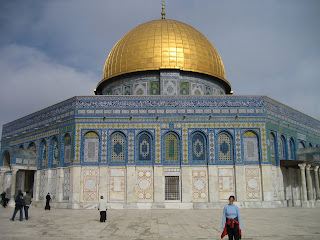 The Dome of the Rock (a mosque) sits on the site of the former Temple that stood for 410 years, being built by the Israelites in 996 BCE and destroyed by Nebuchadnezzar II of Babylon in 586 BCE. In 630 long before the Dome of the Rock was erected, the Muslims recovered the Rock (the name of the Rock at the hear of the dome) and dug it out of the dust and cleansed the area which had been abandoned for hundreds of years since the Roman destruction. (Thanks to Wikipedia with a little help from Kylie for your excellent summarization!) 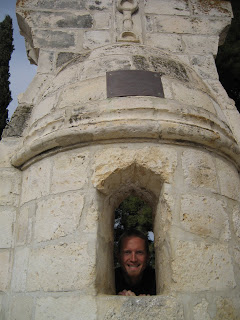 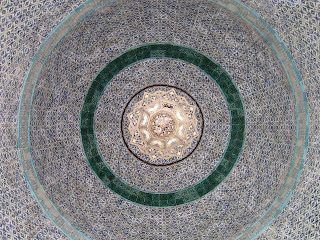 The ceiling inside a "mini" dome. 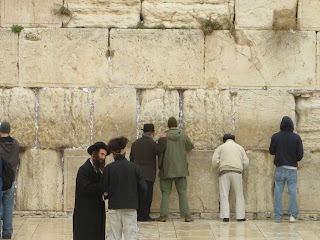 We also headed back to the golden coloured (yes that one is a stretch) Western Wall yesterday. Here is Marc praying for peace in Kenya and also for the restoration of all our pictures, but mainly for peace in Kenya with a little help from a rabbi.
America's golden (just to keep the continuity of my post) boy (sic), has also arrived in Jerusalem on the same day we did. Although we have not personally seen Georgie we have witnessed the plethora of security as well as witnessed a protest by what we believe are Zionists protesting Bush's allowance of the existence of the Palestian Territories?!???? Our trip to the Holocaust museum was also thwarted today by the big man himself. 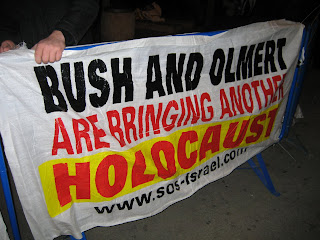 Lastly, my hair is now the colour of gold. After not getting a REAL haircut since last January I decided that Jerusalem would be the place to do it, since many girls here have very curly hair and Jerusalem has many salons. The stylists were ALL men (my first male stylist!)and I not only had my hair done by one man but four. The first combed out my hair, the second put in the highlights, the third took out the foils and washed it (I also believe he was manic judging by the speed at which he removed the foils, scrubbed my hair and nattered at me incessently in Hebrew even though I told him multiple times that I don't speak Hebrew and that I did not understand him) and the fourth did my cut and blowdry. I told the highlightist (is that a word?) that I wanted highlights the same colour as my current ones, which are about halfway grown out. He nodded that he understood and put in the foils. What I did not realize at the time was the large amount of foils that he put in. I soon found out though, especially after expeditious removal that my hair was in fact mainly blonde. 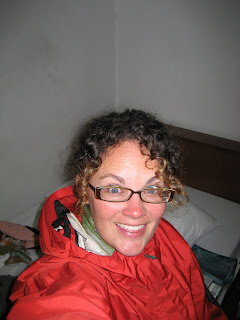 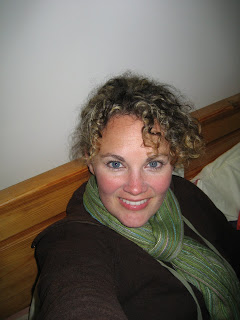 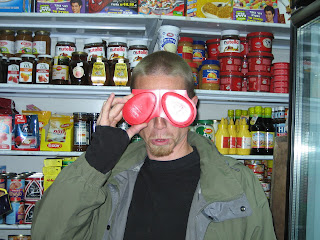 Marc has a new look too!

The stylist who cut my hair did not speak ANY english and after trying to tell the neighbouring hair dresser that I wanted layers he said he understood. Apparently layers in Israel mean I want a mullet like haircut. I now look like an 80's rocker with my hair down. I unfortunately do not have a picture of this yet but will be posting one as soon as my hair is blowdryed when it looks most rockeresque. (If you want a preview of my hair, I look like I could be a member of one of these bands.)

Here's to seeing if blondes really do have more fun!!! 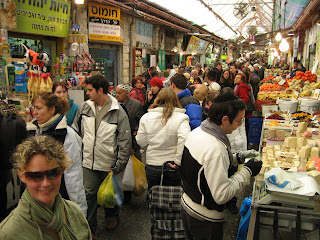 A mullet haha well here in alabama, when we see someone who has a mullet we say "business in the front party in the back." Well the moral of this story is if we are ever in iseral dont get your hair cut unless you can speak hebrew.

Wow, that's not bad at all! A little blonder than we're used to (and I can't really see the cut because it's up in both of the pictures - but the front looks cute) but you still look ravishing. I was expecting a look more something like this:
http://images.buycostumes.com/mgen/merchandiser/19716.jpg

You will have to wait until tomorrow for me in all my 80's band glory, but I must say the pictures do not really do the blonde justice. And believe me it is up for a reason, I do sort of resemble your link!!!
Tina, thanks for the advice, I am definitely all business in the front, but from behind, whooo!!!!

Ooo ooo ooooo, I can't wait to see your mullet. And I think the blonde looks hot 'n sexy with your tan! (Don't get me wrong- you look NOTHING like Anna Nicole Smith, but you look sun-kissed and beautiful!)