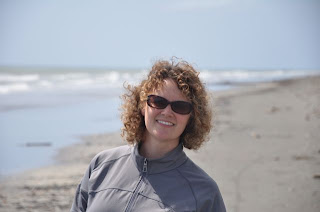 so... as mentioned below, a lot has happened since we were last able to post to our blog. perhaps b/c we have been so busy here, or perhaps b/c new zealand is a pretty stress free place to travel, or perhaps b/c we have not been away enough to be homesick, we have not sought out internet cafes or paid for internet when wireless is available. perhaps that will change... in the meantime i will update you as best as i can up until the beginning of the weekend.

after returning from tidesong we recovered and did some laundry at julie and lowell's in auckland. we also had a few issues to sort out with gus, which were handled reasonably expediently.

having revitalized, we set out to drive halfway down the south island in 4 days to meet julie and lowell once again in christchurch. although new zealand is small compared to canada, the roads are windy and slow and it was quite a trip. fortunately we were travelling with all our belongings neatly packed away in gus' ample storage innards, and with a handy bed right above the cab for roadside naps and convenient parking lot camping.

on our first day out we made it to lake taupo, a bustling tourist town with lots of cafes and restaurants and ways to spend $$. we avoided these things and instead availed ourselves of the lovely parking spots right along the lake where we settled in for the evening. 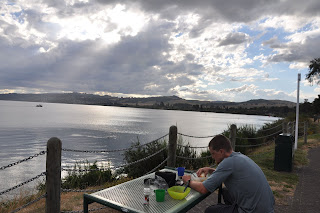 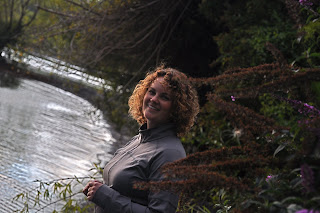 unfortunately they were marked "no camping" so after watching the first half of Iron Man (which i quite enjoyed, particularly after plugging the laptop into gus' kicking stereo system) we retreated a few blocks from the lake and camped overnight in a college parking lot.

we also enjoyed taupo's lovely parks. kids parks here tend to up the ante a bit from canadian parks. i'm not sure if this thing was a slide or a vault or a combo or what, but it was certainly fun! 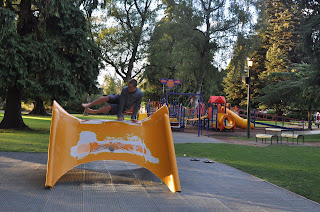 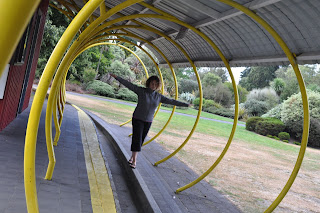 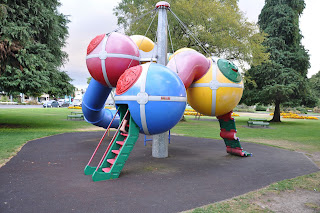 after snaking the mcdonalds bathroom in the morning we pointed south and drove to wellington. occupying the southern tip of the north island, this trendy foodee city is the capital of new zealand. here we really enjoyed the botanical gardens, as well as another awesome playground. we stopped to watch some kids, and then adults play cricket, and were thoroughly baffled by this silly looking game... they were all having fun though. 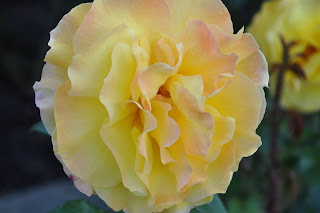 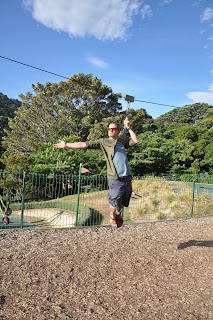 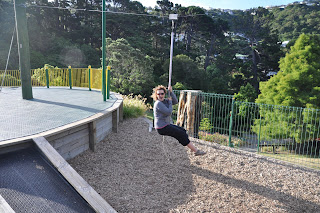 we also checked out the government buildings, which are slightly weird: 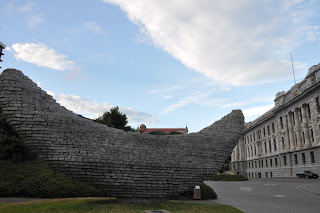 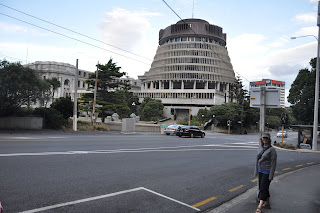 after a great meal (except for the liver pate, that was a gamble that DIDNT pay off!) we parked in a neighbourhood a few blocks from the ferry and bright and early after an excellent sleep we drove 3 minutes and boarded the interislander ferry to the south island. we were lucky enough to be sent right to the front of the ferry and managed to be THE FIRST ONES OFF! that has never happened before and we took it as a good omen and a testament to our ferry boarding prowess. 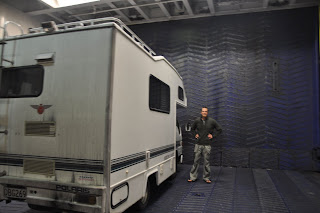 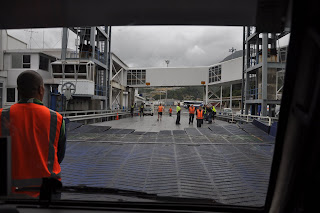 the ferry ride was beautiful, and we met some friends we had made staying overnight in the ketetahi hut in tongoriro, an australian couple who were a bit nuts for hiking/mountaineering and a californian named dave (that's him in the hoodie on the left). 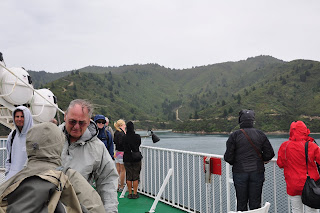 after leaving the ferry first, before any other vehicles, having the entire road to ourselves and witnessing all the other vehicles sucking gus' minimal and environmentally friendly diesel fumes, we took advantage of the open roads and booked it directly to kaikoura, stopping only for a FANTASTIC lunch at a lovely restaurant called "the store" which knew how to make breakfast (for lunch) for marc, and also employed a lovely barista from portland, who knew just how to make the perfect long black for marc (to go with his delectable fudge/oatmeal slice). 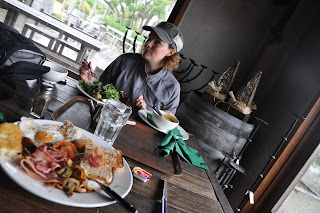 kaikoura is an incredibly beautiful place. a small peninsula juts out from the south island into the ocean, which quickly drops away to over a kilometer deep only a few hundred meters from shore. this creates perfect conditions for an abundance of sea life, which draws seals and birds and penguins (i know, i know... penguins are birds, but they kind of deserve their own category - and we didnt see any anyways, so just let it go okay?) we did however go for a nice hike along the cliffs at the tip of the peninsula and then down to the rocky beaches where we witnessed multiple seals being extremely lazy, as well as multiple seabirds being extremely angry at our presence (the peninsula is home to multiple annual nesting sites). 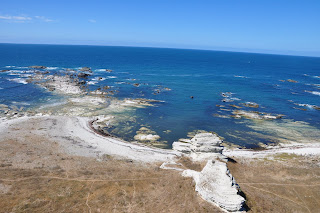 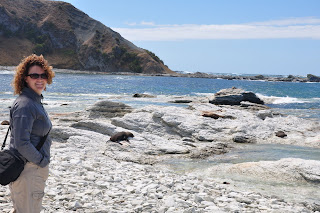 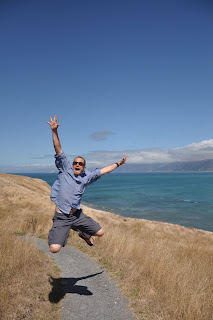 there are also some (apparently) magestic peaks just inland, but that is just hearsay, as although the sky was clear for our day of exploring, the peaks were socked in.

after tiring ourselves out we returned to gus and enjoyed a lovely picnic lunch by the sea, had a nap (did i mention i LOVE HAVING A BED IN OUR VEHICLE??) and then hit the road to finish the drive down the south island to christchurch. here we picked up groceries, fuel and julie and lowell, but not before participating in christchurch's "waitangi day" celebrations in their wonderful central park (think canada day civic celebrations but WAAAAY bigger, with more food stands and music, but less fireworks.

after picking up lowell and a groggy julie from the airport, we drove up the mountains into arthur's pass, where we parked in a spectacular meadow right on the park border and spent the night before embarking on on intense day hike up avalanche peak. i was going to detail this hike as well, but it will have to wait, as i am sick of typing. perhaps julie will write about it first, and then we can just snake her text. 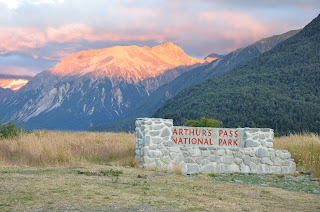 i will quickly tell you that we are now in the famous queenstown, land of adventure, and after a packed weekend of luging, river surfing, hottubbing, and bungy jumping, i am preparing for a day of mountain biking before moving on to our brief time in sydney, australia. if you made it this far in this mammoth update, congratulations and thanks for taking an interest.

oh, and congratulations shareen for rocking your test! (i have no objective justification for this congratulatory comment, but i can type it with certainty nonetheless).
at 1:29 AM

Another interesting post. Thankfully mid March is not far away :) It sounds like Gus is an amazing travel buddy! Love Mum

Pardon me, did I seem groggy when we arrived in Christchurch? Thank heavens for Gussy-goo's bed!!

And now I shall get back to my grueling work day. (tee hee:)

PS- I don't understand the appeal to cricket either. I guess it's just like Marmite- if you don't grow up with it, it's just gross.