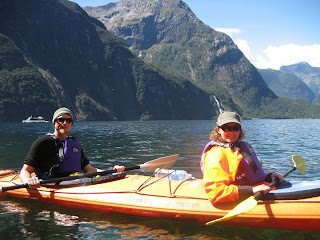 to report on the last week with any kind of detail and still do justice to our experience today on milford sound in one post would be impossible (or at least uncomfortably long), so i will attempt to sum up quickly.

we landed in christchurch and had 2 gloriously sunny days (after a cloudy sydney). 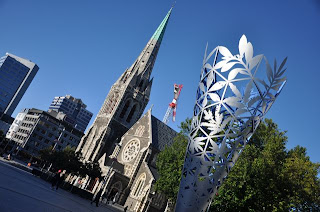 the first night we camped in an overflow parking lot at the botanical gardens and in the morning we drove the 200m to the regular parking lot (opens at 7:00), but the city was repairing the pavement, so we were rerouted down a tiny road which led... right into the park, so that is where we stayed, making coffee and eating our breakfast with green parkland and gardens all around us. 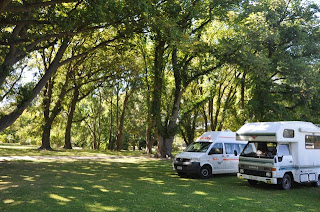 the next day we went south again and stayed on lake pukake. i put some pictures of this campsite up last post, but i will do so again (in a different light) b/c it was so beautiful and free. 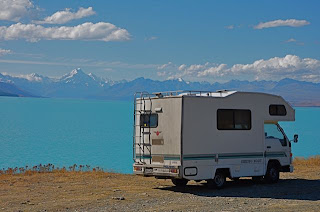 when we drove up to the lake we recognized our own MEC tarn 3 tent given to us for our wedding (thanks josh, hav, ty and aaron, it's still going strong). we later struck up a conversation with our fellow canadians and ended up bringing our chairs over to their site for the night. the evening light was perfect for pictures, with a 2 minute burst of bright pink diffuse light right before dark that looked amazing. 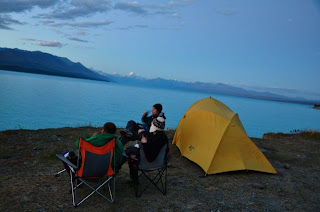 not that the mountain scenes or emerald water needed much help. when darkness fell the brightest starscape i have ever seen was revealed. apparently this area is destined to be the first UNESCO heritage site in the sky, as they want to protect one of the clearest parts of the atmosphere from any light pollution. and yes dad, we did see the southern cross, although it was tough to make out in the midst of magellan's cloud.

after pukake the weather turned bad. all of new zealand was engulfed a storm, and although the south island avoided any major flooding, we were stuck with 4 days of solid rain. we were going south to cross over to stewart island, but the coast was so windy and rainy that we decided to check out the catlin coast for one day instead and then head back inland.

it was beautiful but miserable (weatherwise) we did find a great little sheltered campsite right across from a beautiful walking trail through the forest to a beach. rainforests are the best place to walk when its raining. 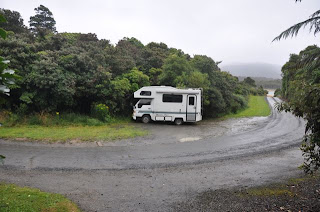 from the catlins we crossed the base of the south island to sleep in te anau before setting out to kayak in milford sound. the day before our kayak we drove into fiordland national park and did an amazing hike to marian lake. 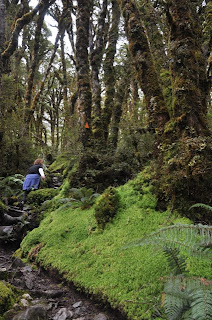 the trail was wide and easy up until this breathtaking whitewater walkway, after which it turned technical. (i love this picture) 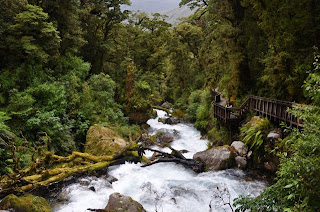 despite passing many people on the trail, we had the alpine lake to ourselves. 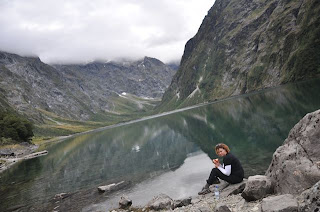 that night we camped at a lake about an hour's drive from milford sound.

in the am we rose bright and early and made the beautiful drive through the alpine passes to milford. the morning mists burned away to reveal a bold blue sky, the first we had seen in almost a week! the perfect weather, majestic fjiordial peaks and calm deep blue water combined to make this kayak trip our favourite experience so far in new zealand, and one of the high points of my life. in fact, the first thing we did when we got off the sound (fjord) was to book a 2 day kayak trip on milford's big brother, doubtful sound. 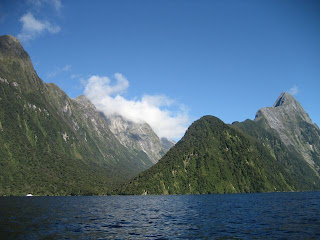 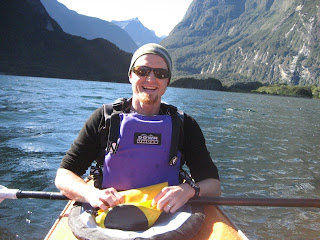 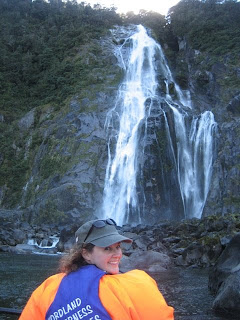 we spent a little over 4 hours on the water, with a half hour break for lunch. pictures will never do justice to the experience. the impact comes from sitting in a little kayak and being totally surrounded by almost sheer cliffs rising 1600m out of the water. the sunshine helped as well, although apparently when it is raining a myriad of waterfalls spring off of every cliff surface. that would be nice too. lets pray for 1.5 days of sunshine and .5 days of rain when we kayak on doubtful sound (march 3 &4 for those who want to mark it on their prayer calenders... also remember to remind God that new zealand is one day ahead of canada). 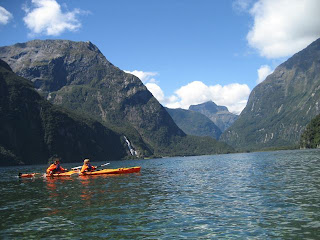 joking aside, this trip was a very spiritual experience. bobbing in a chasm carved out of the ancient rock by a river of ice flowing slowly over hundreds of thousands of years gives you a sense of real power and an inkling of eternity.

our guide offered us a chance to hop out of our kayaks in the middle of the fjord and go for a swim. only i took him up on it. it wasnt even too cold, although again the beautiful sunshine probably helped. 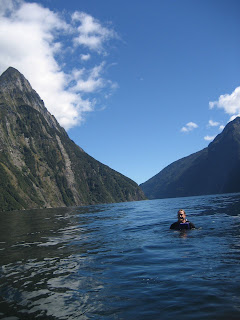 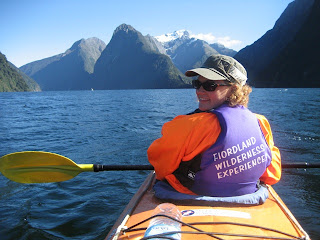 on the drive back from milford we stopped at almost every opportunity to hike, and there were a lot. the road to milford winds up above the treeline and then punches right through a mountain to descend to the fjord on the other side. the ancient glaciers that formed this landscape still have a presence in the higher altitudes and around every corner there was a new valley, with glacier topped cliffs and soaring peaks. 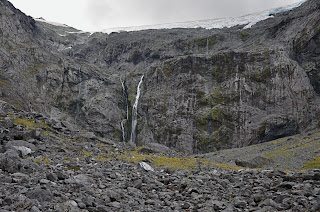 until yesterday i had enjoyed the southern alps but thought that canada does it better. then we came to fiordland. perhaps canada still has this kind of topography, as this is what i imagine baffin island to look like (comments jarrid?) but it is not this accessible. 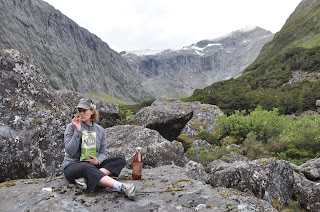 i am writing this blog post in our current campsite by the river in a place called deer flats. it is another idyllic spot. the nearest site to ours is 100m away and it was not occupied last night... in fact i think we were the only people in this whole campground. this morning a very funny kiwi lady and her australian friend came to the neighbouring spot to do their laundry in the river, but we dont mind. as long as they keep it down. 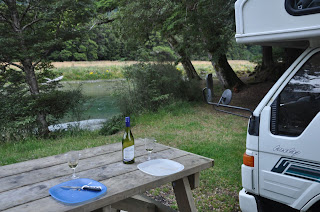 unfortunately this campground is not free. the price we pay for clean toilets, a picnic table, a rope swing and 1/4 acre campsites is the equivalent of $6.50 canadian. that department of conservation is always trying to rip us off! 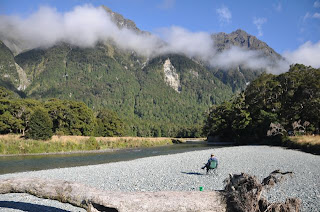 you can just see gus in the bottom right under the tree.

after a leisurely breakfast, typing this post and writing a few postcards, it was time for a swim. 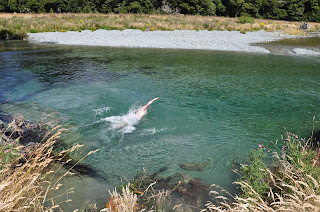 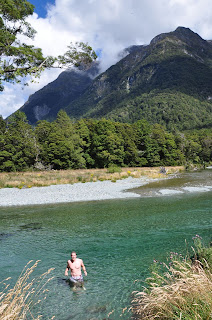 today we plan to make our slow way back to queenstown so i can finally get to biking on the local ski hill. weather has thus far frustrated my various attempts tomorrow is looking good. luckily i know that we will have more time in fiordland (my new favourite place, right up there with lamu and goreme) as we have our kayak trip booked here in a week. i love fjords.
at 6:34 PM