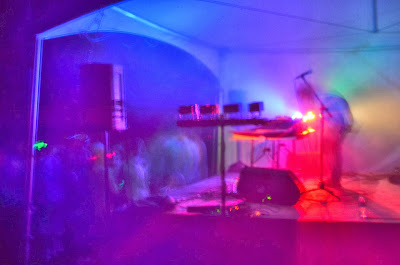 this september saw the third annual forest songs music festival in chilliwack at island 22 regional park.  it was our best year yet, in ease of organization, turnout and party vibe. 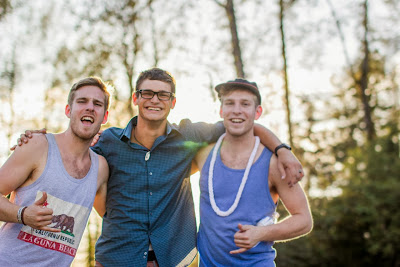 my friend rob (above left) and i organized the event.  he booked the bands and the stage/sound equipment and we both shared the background work.  we also enlisted the help of numerous friends to do all the other things that need doing to make a music festival happen.  thanks everyone!  also thanks to 89.5 the drive for all the free advertising. 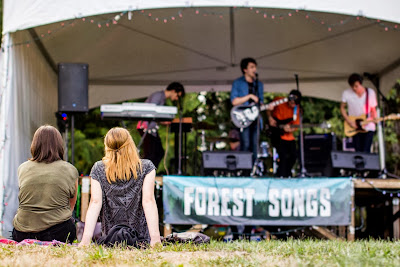 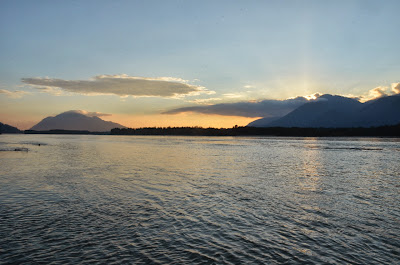 we chose a new site in the park this year, bounded by the fraser river on one side and a giant log on the other.  the tighter space produced a more intimate feel.  the audience maxed out at around 150, which was slightly more than last year, but felt like even more b/c of the reduced space. 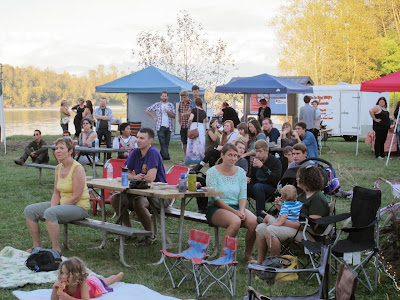 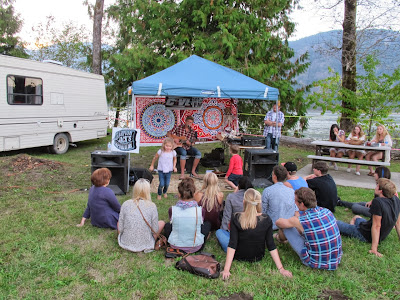 civl radio and champion jack's emporium helped out with the side stage this year, putting together a sweet little venue for singer/songwriters to showcase their work while the larger bands took down and set up.  a small crowd spontaneously gathered for the more intimate shows, and it grew with each act.


we got a few more families out this year, and the kids weren't shy about sitting right up front and dancing when the mood took them.  langley's derrival opened with a tight set that featured a full, lively and joyful sound.  this band was probably ty's favourite b/c he loves their humorous and heartfelt video victoria day.  he calls it "the dragon song".  if you haven't seen it, it's certainly worth watching. 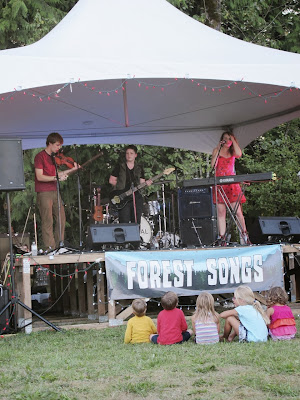 the oh wells folksy honest sound was also a hit with both young and old.  the lead singer was passionate, open and authentic.  the band engaged well with the party, sitting front and centre before and after their set and they made a serious dent in our backstage twizzler stash. 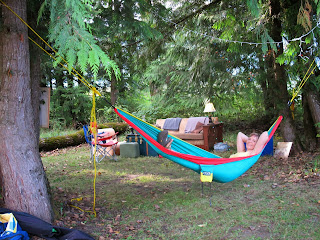 rob moved his living room to the park and set it up behind the stage to make a laid back green room/prep area for the bands.  my buddy jarrid's slackline and a few hammocks completed the fun vibe. 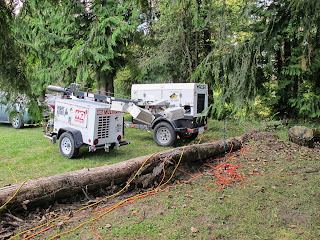 running a show in a park is not easy.  we had two generators going to run the sound and lights and our food vendors.  shandhar hut ran almost entirely on propane, but the gourmet grilled cheese vendor had a massive grill that could trip the breaker all by itself.  none of us are professionals, so we had some power issues throughout the show, occasionally having to sprint back to the generators, reset the breakers and frantically switch power cords around to redistribute the loads.  the audience didnt seem to mind and the bands rolled with it quite well. 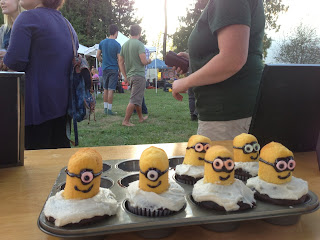 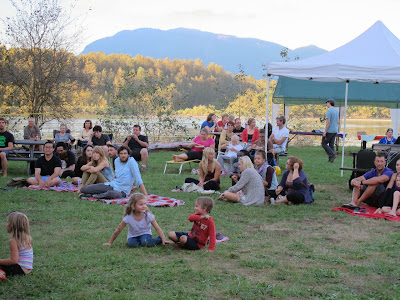 once again we were blessed with absolutely gorgeous weather.  golden sunshine, but not too hot. 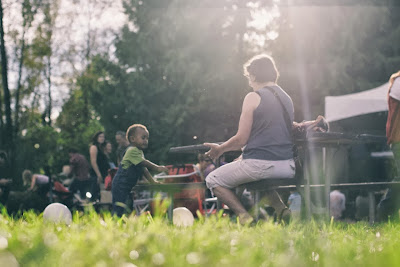 as evening fell the energy of the show changed, with harder music, more dancing and a bigger effect from our minimal light show.  local blues rockers little wild punctuated their set with a band led conga line through the crowd.  you can tell they've been working hard together... their songs were extremely polished.  seriously nailed it. 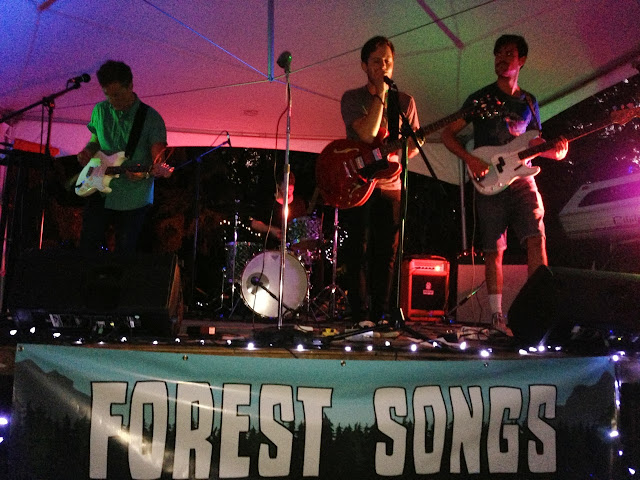 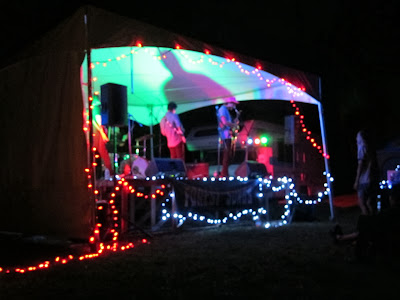 abbotsford's own oh no! yoko put on a raucous set full of experimental effects and fretboarding licks. 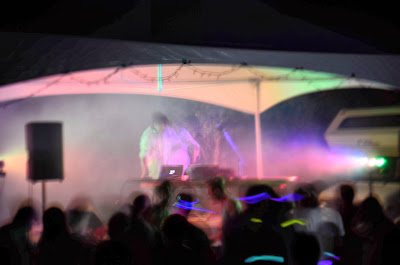 to end the show, our good friend jamison did an hour long DJ set as teen daze.  by this time the crowd pulled in a little tighter, rob handed out glow in the dark gear and i kept busy dancing and distributing bottled water and chocolate chip cookies. 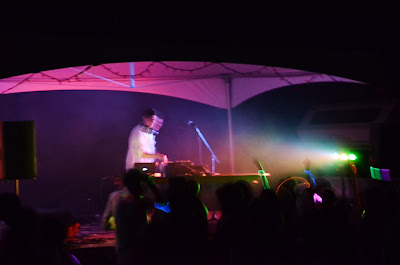 after all his touring experience jamison is a master at working the crowd.  the cool night air, his bass heavy trance beats, an open and uninhibited audience, trippy lighting and a fog machine combined to create a floaty and euphoric party.  a perfect ending to an awesome day. 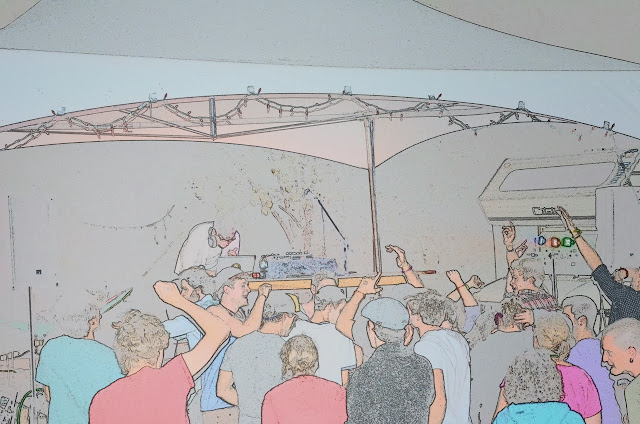 note big bessie guarding the party's flank.  having a table, a fridge and a sink right beside the stage was extremely handy, and i like to think our old motorhome contributed to the happy outdoor vibe.

too soon the party was over, and all that was left was the cleanup.  again our friends pitched in and many hands made the work light and fun.  it was all worth it, and each year we learn a bit more about how to stage a festival.  thanks rob and jamison and everyone else who helped out.  sometimes you have to make your own fun... what an amazing time! 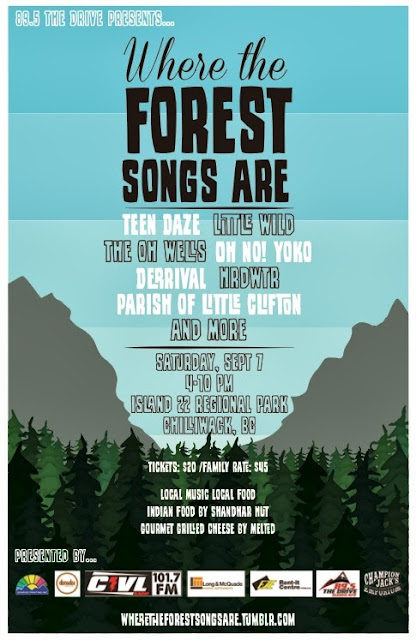 thanks as well to eric vanwyk for making this professional concert poster for us for free!
eric does great work.
and a final thanks once again to 89.5 the drive and all our other sponsors!