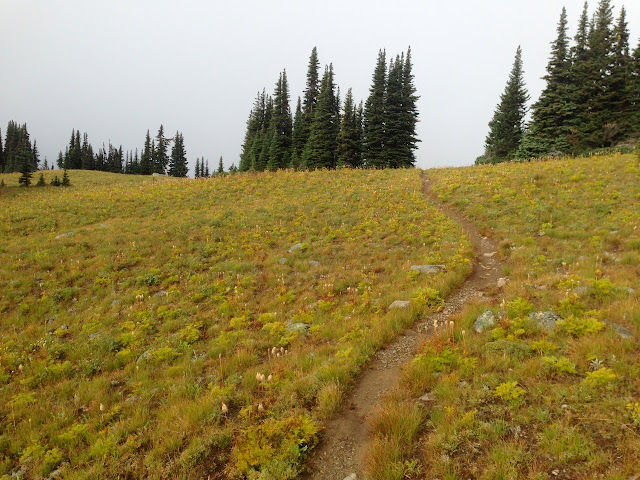 every september a window of opportunity opens for an epic alpine ride.  this year some friends and i planned a route that included a car drop, allowing us to do an amazing 4 hour ride arcing through the alpine, followed by a 2 hour singletrack descent. 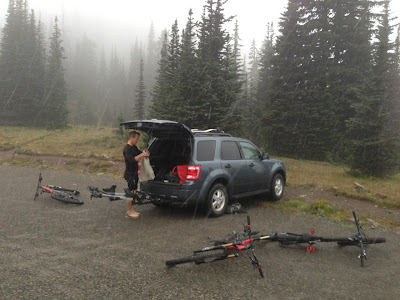 we met early (read EARLY) and drove out to our starting point, where it was snowing.  and foggy.  and cold. 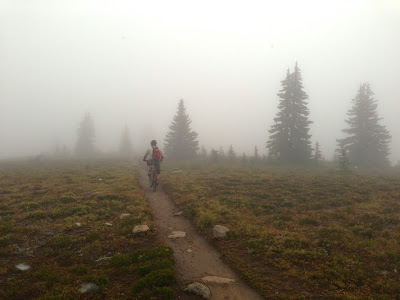 fortunately xc riding warms you quickly.  the trail was beaten smooth and only occasionally technical.  we started with a whipping downhill, but quickly regained our altitude and then some.  the dense fog and sparse trees contributed to the surreal atmosphere. 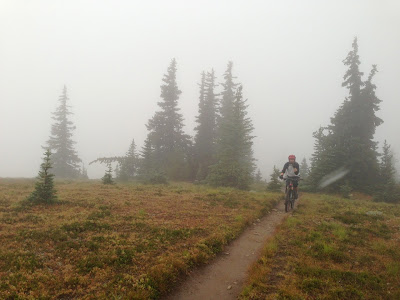 our route undulated through varied terrain depending on our elevation.  there were alpine meadows, scree fields, dense forest and a couple mud bogs. 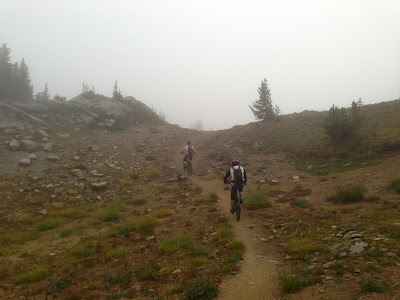 after a few hours of riding the sun started to poke through the clouds and the fog quickly evaporated.  the rain occasionally sprinkled, but never poured. 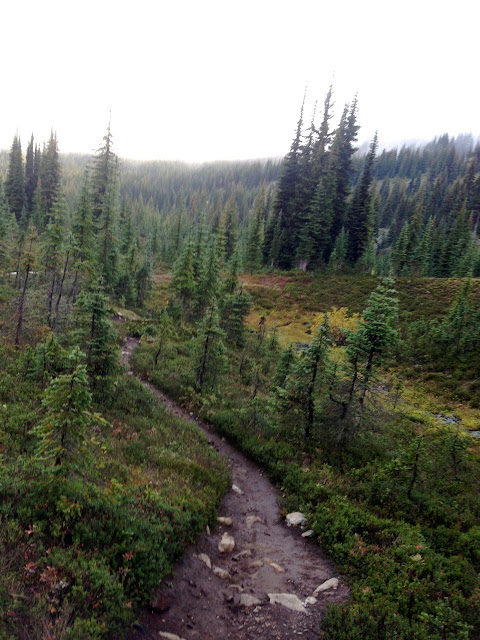 this is truly some of the most amazing biking i have ever done.  pristine singletrack snaking through varied alpine settings.  sometimes i just had to stop and stare. 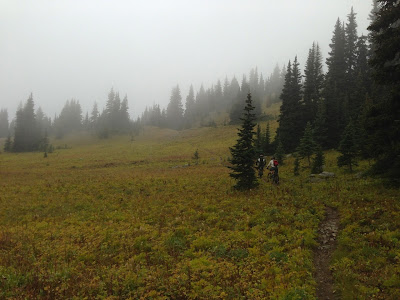 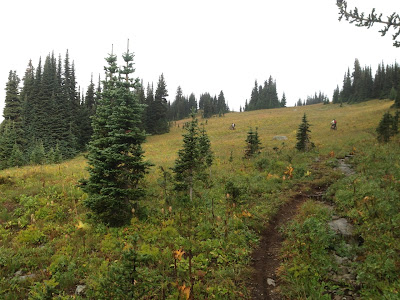 even just looking at these pictures makes me happy. 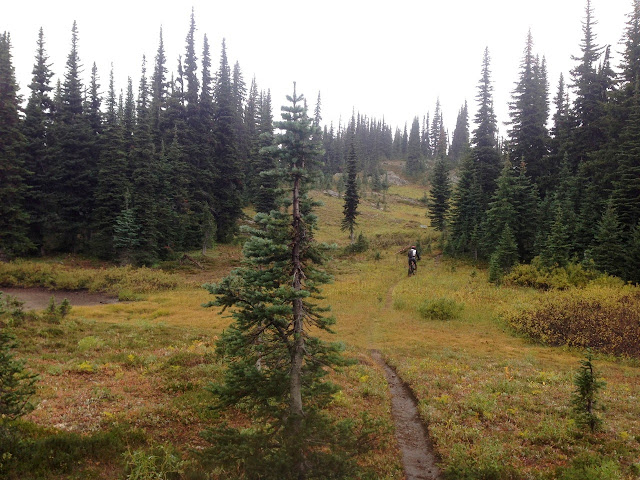 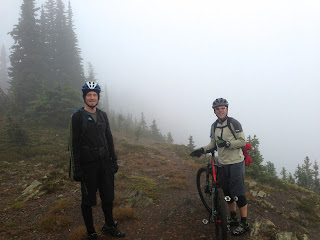 after gaining and losing and regaining about 1000m in elevation we returned to the clouds before beginning our definitive down. 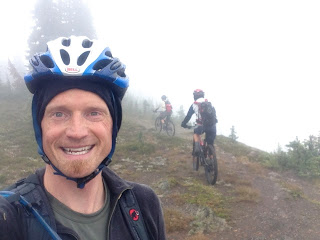 at this point the trail became much more technical, moving more on rock than packed dirt.  my slayer ate it up. 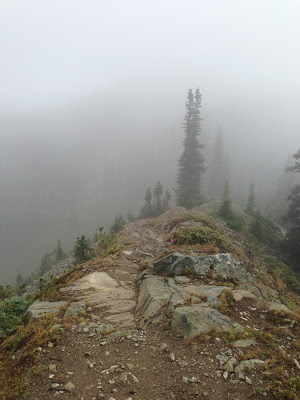 after dropping off the ridge we approached an alpine lake and the ground became softer and spongier.  there were a few "choose your own adventure" portions of the trail.  one of the adventures was landing face first in a bog.  at least we were already wet. 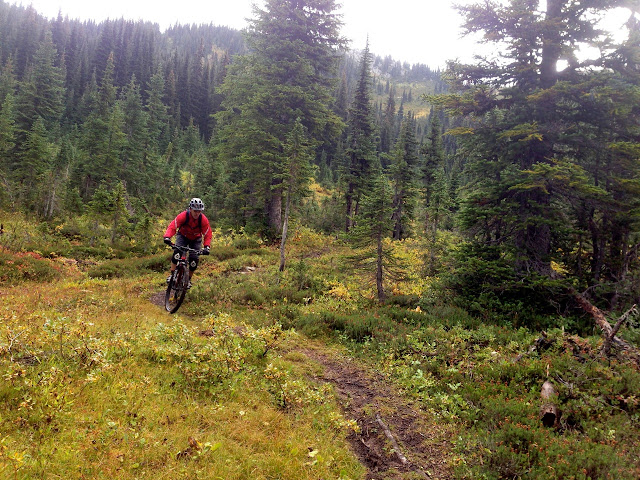 the lake was gorgeous, but it was still a little chilly for a swim. 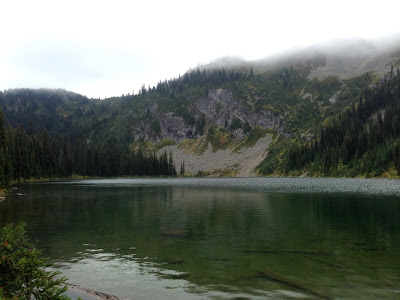 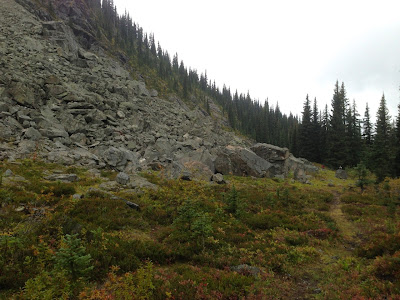 on the far side of the lake we began the downhill in earnest.  the grade was perfect, allowing high speeds with only minimal feathering of the brakes, and plenty of rocks and roots to pop off or hop over.  just past the above rockslide we ran into a big black bear.  he sprinted away from us down the trail.  we gave him some space and never saw him again. 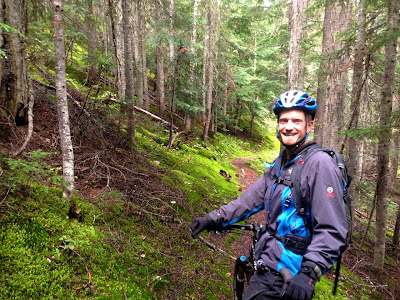 at a certain elevation we entered the magic forest, which featured a lush carpet of insanely green moss and giant funky mushrooms everywhere.  they may or may not have been hallucinogenic, but we sure felt like they were.  it is quite likely there were smurfs there too, but we were moving too fast to confirm. 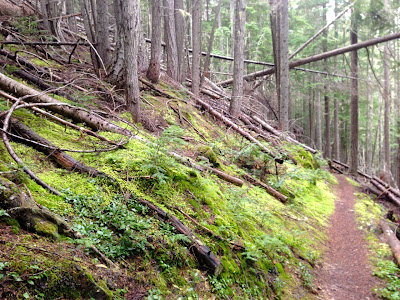 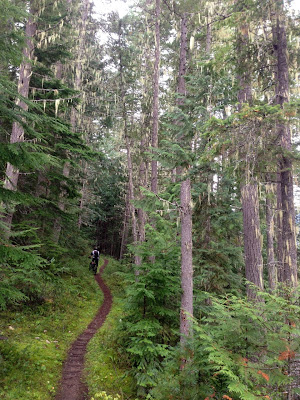 the final part of the route flattened out considerably, offering high speed single and doubletrack with big whoops and a plethora of extremely slippery bridges.  there were even a few climbs, which were quite offensive at the time.  on a slower section we ran into a trailbuilder, who smiled and waved.  the only other person we saw all day. 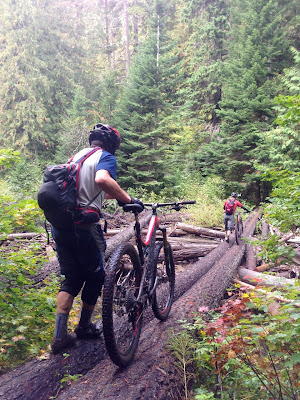 finally we reached the hwy, directly across the road from the dropped car (good planning!) and one of us took a nap while the other two returned for the first vehicle.  on the way home we stopped for a fully greasy and overflowing plate of burger and fries.  a full day out, 40km of biking and it was just after lunchtime!  i love BC. 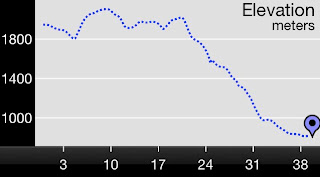 Great riding with you and Phil, a real highlight for the fall riding! Thanks for the invite Marc, let's do it again next year.