well we have many more tales to tell from our trip to montreal and happenings since but i want to write about our crazy reentry while it is fresh in my mind.

first some context from our return voyage. after staying in montreal we stopped in edmonton for 3 days. we stayed with my sisters and hung out with old friends. julie and carlynne hosted a killer bbq in their backyard for which fatima picked fresh raspberries and saskatoons at considerable risk to her person. we then checked out the action downtown with ty. 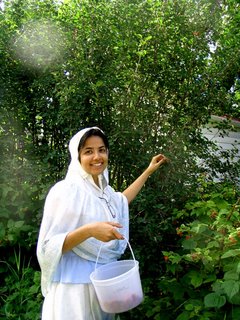 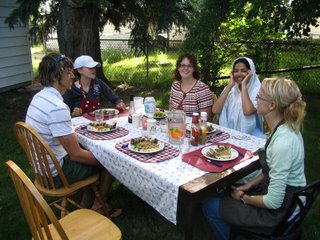 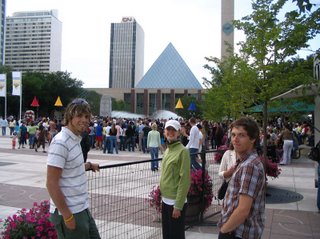 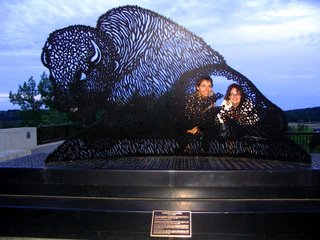 our final morning in edmonton started out very relaxed with an enlongated breakfast with fatima at the sugar bowl. our meal was elongated b/c smart fat advised us to phone ahead and we found that our flight was delayed 1.5 hrs. when we finally got into the air it was a bumpy ride. we have been flying a lot lately and this was the bumpiest flight in a while. lots of thrilling free fall stomach in your throat/perineal tingle moments.
about 20 min into the flight the stewardesses asked if there was a doctor or any medical personnel on board. there was a lady in the back who was unconcious and unrousable. with the help of a nurse from ft. saskatchewan (who lives next to the sheepranch we posted about earlier) and a firefighter from edmonton we determined that the lady was pretty sick and started treating her. at one point the stewardess asked me, "the captain wants to know what we should do... if you decide in the next 30 sec we can land in kelowna, otherwise we're stuck in the air until abbotsford where we can have an ambulance waiting. its your call." crazy.
once we got to abbotsford (i didnt want to stop in kelowna) they wanted to sit her up and put her seatbelt on and i said no way. "but its regulations!! if she's not wearing a seatbelt the captain cant use the brakes. we'll have to land on a different runway out of turn!" well she's not moving, so put a belt around her waist somehow and do what you have to. (the fireman and i actually volunteered to brace ourselves infront of the lady but the stewardesses were aghast at the very idea). so we bumped the other flights and flew straight into the airport from east to west instead of taking the usual roundabout approach.
after seeing the lady (who was looking better) into the ambulance kylie and i went to pick up our chevette from the parking lot. last time we flew home and tried to pick up the chevette it turned into an afternoon scavenger hunt so we were looking forward to knowing precisely where it was parked and avoiding any more drama for the day. however when we started the car we noticed that it had NO gas despite our prophylactic fill the day before our trip. in fact the gas cap key was missing and the gas cap itself was all scarred up by a screwdriver. at least the window wasnt broken. we barely made it to a mohawk (coasting on fumes for the last block and a half) and got the lock open with a screwdriver, pipe wrench and skinny little worn down car key. once the lock was open the car wouldnt start. we played with connections and banged on the starter for a while before finally starting the car with a boost. we then filled up with the car running and left to get niko.
no more drama, we picked up niko without incident and were happily and enthusiastically reunited.

here are some more pics from montreal... what an amazing week. 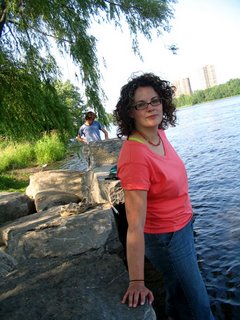 taking a break from biking along the st. lawrence 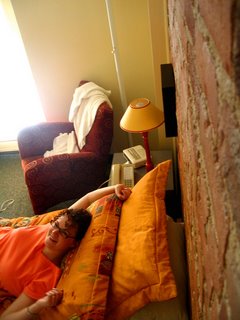 our room at the auberge de la fontaine which initially turned me off with their snooty attitude and high price, but won me over with their incredible complimentary stocked (i mean STOCKED!) kitchen, beautifully breathtaking breakfast and our perfectly positioned personal porch (i suppose it was technically a terrace but i am an avid alliterati) overlooking the park. 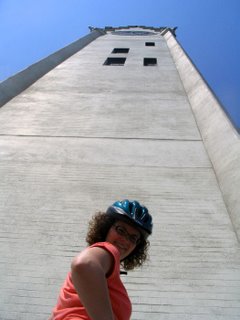 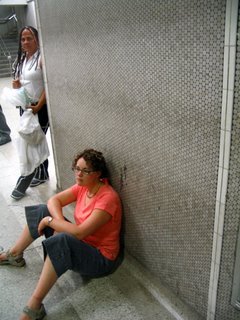 while framing this picture i was exclaiming about the texture of the wall, but that is not why i took it. 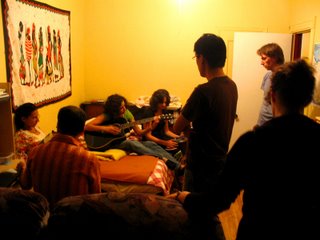 josh's temporary appt and our new friends.
at 12:10 AM

Ok. that re-entry story was pretty good, with all the sick passenger and such. But, I don't think the car part tops the hunt you guys had to do last time!

I agree, it took a little less time. :) Kylie