Marc and I are currently in Princeton. We have been here twice before and while Marc is working, I have been busy reading and watching TV. It's a rough life! We currently don't have cable at home and I have soaking up the channels for the two days we are here. I have been amazed at the lack of quality programming on television, but not amazed enough to turn it off yet. (As I write, the new NKOTB video is on, did you know it was #3 last week on the MuchMusic countdown?!!!!????????? I put all the question marks there like I was too cool to like the New Kids but I had the posters, the lunch boxes, multiple shirts, the books and even slept on their sheets with Joe's face close to mine every night.) :)

Anyways the reason for this post is much more pressing. I have bought a new bed spread. And a lot of throw pillows. Which Marc hates.

Let me start from the beginning. When Marc and I were in Egypt we bought this beatiful, intricate bedspread which I absolutely loved!! (And still do!) However when we got it home we realized that everyday wear and tear on the bedspread was making it pill and some of the seams were starting to tear. Being that I am IN LOVE with this design and that a trip to Egypt to replace it if we wreck it is not happening anytime soon (although I would totally be up for it, cheap juice here I come!) and I would be devestated if it was ruined, I decided it was in my best interest to purchase a new bedspread. My plan for this one is to hang it on the wall to display it. 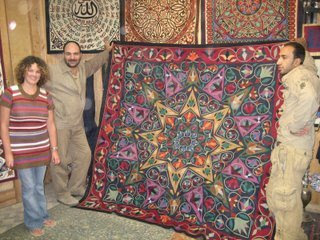 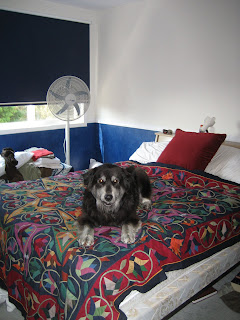 Here is a picture of our room before the new bedspread. Yes Niko is on the bed and no we usually didn't stop him from jumping up but he really wasn't on the bed that often so I found it quite amusing that he was on when I went to take the picture. Also do you think he has a bit of an Elvis sneer in this picture?

And here's the new bedspread, which both Marc and I love! The pillows, not so much! I love them and think they look great! Marc however does not. 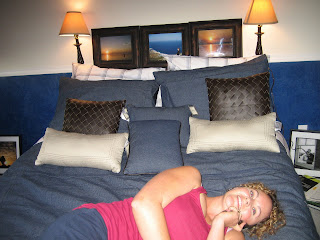 I would love to show you some better pictures here, where I am not laying on the bed or talking on the phone and we have hung our pictures above the bed but unfortunately I am in Princeton watching videos of women acting sexually available. (As my cousin Erin would say.) As a sidenote, the award for the skankiest video ever goes to Girliscious and their video "Stupid." I need to find out where these awards are handed out and submit my suggestion! I would not want to attend in person though, all the nominees in this category in one room would be a little too much for my retinas to handle. ;) 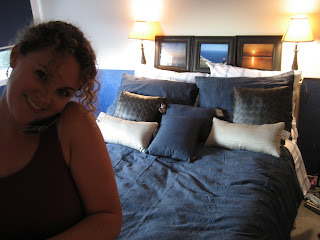 Please disregard the tags on the pillows, I (or should I say we or he, because I have decided) have not yet decided whether to keep them or not.

Soooooo... what I am trying to say in this long, disjointed, rambly post, is that I love the pillows and think they look great and tie the room/bedspread together but Marc hates them. He doesn't hate the way they look, in fact he thinks they look quite nice, he just hates throw pillows in general. He thinks they are totally non-functional and make it impossible for him to lay on the bed during the day. He was not open to my suggestion of moving some over before laying down. I also was willing to compromise and take two of the pillows back. He is not willing to take that compromise and wants me to take ALL of the throw pillows back. My penchant for throw pillows is not new, before we went to Kenya I had quite a few on the bed as well. Not quite 8, but still! (Is there really 8 throw pillows on the bed?! That is a lot!) 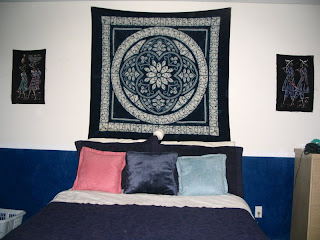 Anyways, I am opening up the discussion here. What do you think of throw pillows? Should I convince Marc to keep them? For those of you who know Marc this will be quite the feat, in fact if I can convince him to change his mind I will deserve an award along with Girliscious! Hopefully not the same one though!!!
at 5:39 PM

Kylie, the pillows look good.
This would make a nice guest bed that was only used once every now and then. But I am in total agreement with Marc. That is way too many pillows to be considered a functional bed. For me, a bed should have 2 pillows. I however am married to someone with a pillow fetish and alas, we have had to come to a 'compromise' (6 pillows - yes this is a compromise from the original 12 or so. *smirk*).

(Don't watch too much TV, you may become another North American with a lower IQ)

Okay....I LOVE THEM!!!! Your bed looks awesome! I can only dream of a day that my bed and room looks that good. I say keep them...all of them! Marc can suck it up to make you happy and your bed happy! Tell him to sleep diagonally and he won't have to move any pillows during the day! Ha! Ha! I honestly think your bed looks great and I hope you keep the pillows! Good luck!

Thanks Jill and Lowell! Jill, sleeping diagonally is a good suggestion, I think Marc usually does it anyways when he naps so he can just move down a little. Lowell, I also think all men hate throw pillows. I think it should be my mission to find one who doesn't.;)

You know that scene in the movie "Along came Polly" where jennifer aniston "kills" the decorative throw pillows with a knife? That's sort of my opinion of throw pillows except for the whole psychotic killer influence. I think one or two look good on couches but on beds they're kind of more annoying than anything else. yeah....i'm on marc's side, sorry kylie :(

shelley, you have given me the first male who likes throw pillows! Ben Stiller! Does it count that he is a fictional character?

I don't think Ben Stiller likes the pillows in the movie, actually, he has the habit left over from his previous girlfriend (it's bed time? take the pillows off, put them on the bench...), and Jennifer Aniston's character shows him that he's living in the past and it's insane. But they also had about a bazillion.

Kylie, I love the pillows, otherwise it's just a boring bed. Marc can just deal with it. I've heard on decorating shows that odd numbers of pillows are ideal so maybe you can reconfigure (get Marc involved to figure out the optimal configuration?) so you only have 5? I love the scheme you have going on though... I think Marc should just suck it up and go lie down on the guest bed if he isn't willing to move a few pillows.

During a very recent visit to Marc & Kylie's, I had opportunity to wage in on this debate with first hand viewing of the situation (or would that be first eye...). It is clear, the bed needs to shed the pillows. I'm in agreement with Lowell; two pillows, unless of course there is a direct function of the extras, i.e., pajama party pillow fight. A boring bed isn't remedied with stuffed upholstery unfortunately...

Fraser,
You have no idea how many pillow fights and pajama parties I have planned now that I have the pillows to do so!

Now you tell me.

nature is also prone to producing things in odd numbers. In landscape design we also use odd numbers in our designs. that being said. i think the 4 big ones should stay. so that leaves 3 smalls.... maybe the 2 long and skinny and one sparkly one to "jazz" things up? sparkle in the very front of course. is that a comprimise? plus a happy kylie and bed...might make happy bed activities. unless ofcorse you are paraniod about getting them dirty and having to remove them for every bed activity :)

Oh Kylie. YOu married my brother. That is your lot in life. While I think we both agree that this is a very good lot in general, it also means that you will have no throw pillows. My husband really likes throw pillows. And that is MY lot in life. Making the bed with eight pillows every day is an extravagance of time. But it seems that is my lot in life these days as well....

My vote - keep the pillows, they look great! Sorry Marc, I know it is not a good idea for the mother in law to voice her opinion. ( I know what you are thinking )