Hello, this is Julie (Marc's sister) here. Marc and Kylie haven't had internet access for 4 days now, but Kylie had already written this up as a draft, so they asked me (via the phone) to post it. Scads of pictures aren't included, but they will post them when their internet is up again (sporadic though it is).
Enjoy!

Evidence . . .
1. Our next door neighbour here in Kapsowar is from Calgary (she has been here for 20 years) and some of her biggest supporters are friends of Marc’s from Pioneer Ranch Camps in Sundre. Apparently they even e-mailed Marc last year that he should go to Kapsowar but we weren’t seriously looking at where we wanted to go yet so we don’t remember the e-mail. Marc’s parents connected with them last weekend in Sundre and they were shocked to find out we made it to Kapsowar through another route. (Marc’s cousin Rob who was here two years ago.)

2. I can still participate in March Madness from Kenya. I absolutely love NCAA basketball and even though I can’t watch it from here (this is really the only TV I am missing) I still entered the pool at my dad’s school. We don’t have a printer here so I copied the brackets onto a piece of cardboard. I picked Kansas to win based on my highly researched information. (Which consisted of me asking Marc – Kansas or Ohio?) Go Kansas Go!

3. Someone gave me a Canadian apron here. I am not completely sure yet where it is from (I wish my Swahili was better) but I love it. A little piece of home here. 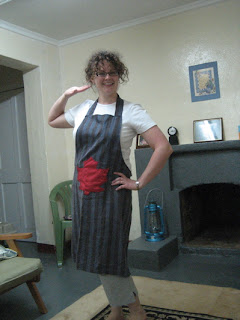 4. There are a lot of bugs here that are really gross. This is not evidence that it is a small world because we don’t have these bugs in Canada but they are small and live in the world so I will show you some pictures of what I have been having to kill in the last couple days. Yuck! 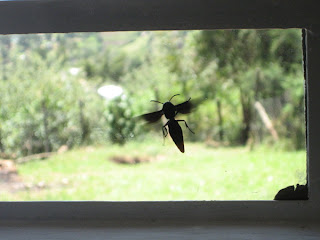 5. Lastly, the best example of how small the world is . . . Last night we attended a birthday party for a man named Ajack. 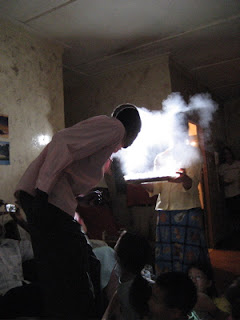 He is from the Sudan and is working here in Kapsowar with Samaritan’s Purse under the Sudanese Doctor Re-integration Project. (Marc will post more about this later, he will be teaching some of the students as they come through and is very excited about this.) Ajack was born in the Sudan, then was in Cuba for much of his life and came to Canada in 2001. He lived in Edmonton until 2005 when he became involved in this project. Marc and I were talking with him last night and when we found out he had lived in Edmonton Marc asked if he attended church there. Turns out he did and he attended Central Baptist Church where my former youth pastor and his wife (Doug and Roxy) are now pastors. I asked if he knew Doug and he popped up and left his party. He came back with a picture of him and Doug and some of his fellow classmates. What a small world!!!! 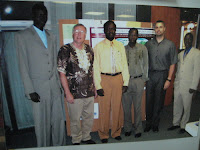 Here is a picture of Ajack (on the left) and Doug (second from the right.) We had a wonderful conversation about Edmonton after and the winters in Canada. Ajack gave a speech afterwards about how he came to Kapsowar. What an amazing story he has and what a privilege it was to attend his birthday party!

Off to observe an English class at the girl’s high school and then I start this afternoon as the secretary for the hospital. (!!!???!!!) Wish me luck. (Sorry for the small pictures that's all I can upload right now.)
at 11:51 PM

Good job Julie! It's so cool all the connections that you have found between Kenya/Canada. The world never seems as scary and big when you actually go to places that you think will be scary and far, far from home.