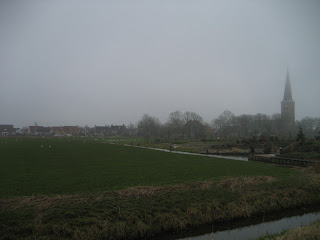 kylie left it to me to describe our time in friesland but unfortunately we are quickly running out of time here in holland with a free fast internet connection. i will just put up some pictures for now and a brief description and hopefully talk about it more later.

as kylie mentioned we stayed in a beautiful little hotel above a bustling square in franeker, friesland. my family is from this area and many of them came from a small town a few km outside of franeker called Tzum (pronounced "Choom" with a little bit of Z sound in the beginning - i dont think we ever got it right). my favourite part of our trip thus far was walking around this tiny town and seeing where my grandfather grew up. you could walk around the whole town in 5 minutes and for businesses it had only a bakery and a gas station which were both closed, but it had this amazing centuries old protestant church with an absurdly tall spire which disappeared into the mist. my family name is not a common one outside friesland but in Tzum's cemetary about a fifth of all the graves were related to me. we found my great grandparents as well as great uncles and aunts and other semirelations. walking around this old cemetary in the myst and seeing my name on all sides (as well as on license plates on parked cars) and seeing the fields my grandfather worked and the paths he walked as a child had a big impact on me and it was difficult to leave the town as we walked to another nearby town which was also populated by relatives. 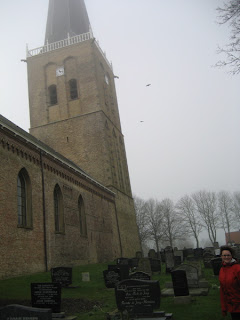 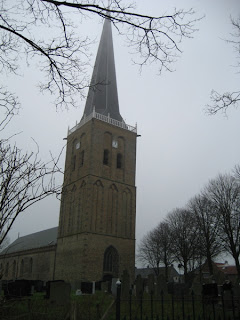 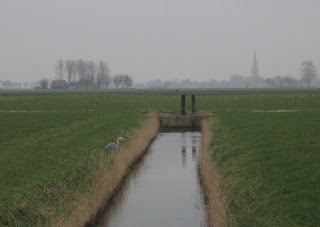 in franeker we found a street named after one of my academic ancestors. not a particularly important straat, but a straat nonetheless. 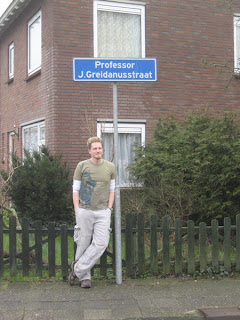 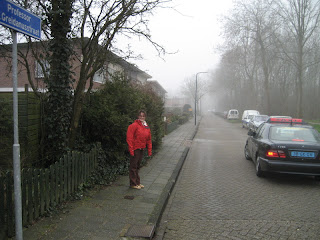 after touring tzum and hitzum we walked back to franeker on a path through the fields and pastures and then took the train to haarlingen, a coastal town in friesland (btw amber, dont be fooled by all that german/paraguay nonsense, this province is where your husband is REALLY from). friesland is a beautiful area and the towns are amazing... all old bricks, lovely bridges and ancient churches. also very clean and super friendly. we felt very at home. a good grounding experience before going on to new things. 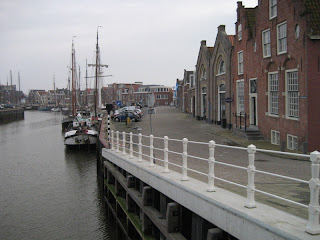 Glad you connected with Dad this morning. Maybe you didn't get to great grandpa's farm, or meet the Sid Greidanus we did, but the time you had to walk through the towns was awesome. We were too busy visiting to do that and I really would have loved that part too.
Happy and safe trip to Nairobi!
Love Mum

Hi Marc & Kylie...
Glad you are having an amazing time! What a wonderful experience to walk where your ancestors are from! Did you see any Friesen's in Friesland? I think this is where they are from a long time ago?? Best wishes with the travel down south!

Love the pictures and stories of your trip thus far. Kylie, your story of falling in the train station is the best. That's really cool that your found a Greidanus straat. Did you take the sign?

Hey Marc, I think Dad has a picture with that same street sign that was taken last summer when they were in Holland with all the sibs. Neato!

in answer to your various questions:
1. yes, rick's family originated from a country where prostitution and marijuana are now semi-legal, although i'm sure he would claim some extremely conservative german cross breeding (actually friesland is very conservative so he can breathe easy).

2. i believe i am officially on record as being opposed to sign stealing... plus it wouldnt fit in our pack.