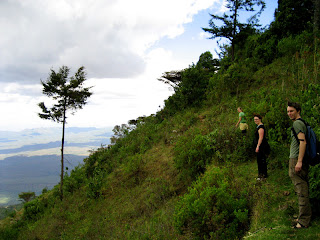 josh and kendra's visit was short but oh so sweet. it was fantastic (and a little surreal) to see friends from canada here in kenya. after taking a bus from nairobi to eldoret they caught a ride with an SP vehicle to kapsowar on friday evening. after catching up over mexican pasta bake, fresh grown sprouts (more on that later!) and fresh supplies from nairobi late into the night we got up the next morning with the intention of walking along a ridge to the north of kapsowar that runs along the great rift valley.

here is a picture of our route. our hike took a little over 7 hours with several breaks to take in the views and relax over soda and chapati in a nearby town. the dotted lines denote portions of the route that lie behind the pictured scene. the trail is not particularly to scale, as the first portion of our hike (the first dotted line starting at the white dot) to the base of the peak in the distance took us over 2 hours. we started from our house and headed down to the river, then slowly climbed up a steady grade (on a road built by italian POWs) until we reached a large church that apparently has been under construction for over 7 years. at this point we ventured off the road and onto the cattle trails in order to attain the peak pictured waaay in the distance.

at the top we were rewarded with spectacular panoramic views of the great rift valley. 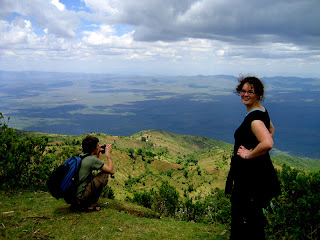 we were also an attraction for the local kids. we had a great time with them and enjoyed taking their picture and then showing them their own faces on the camera display. 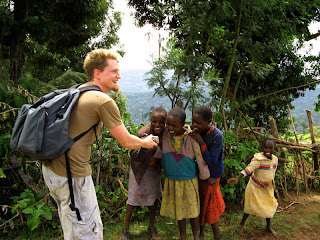 at one point i was trying to determine if the path ahead would lead us to the next village we wanted to walk through. i was speaking slowly and in broken simple english and gesticulating wildly trying to get my points across. 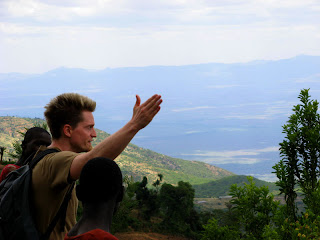 finally the young man i was questioning grew tired of the silly white man's antics and spoke quite clearly in excellent english for the first time, "i am not understanding you well sir. what is it exactly that you want to know?" whoops! i suppose just because you happen to live in rural africa on a mountain peak with incredible views in all directions does not mean that you are not educated.

after the peak we made our way down the ridge with amazing scenery on both sides. the lightly worn trails we were following led us right through many personal properties and we received a friendly and heartfelt welcome from everyone we met, even if we couldn't communicate very well. we were amazed at how well kept all the households were, with immaculate yellow walled huts, cleanly swept small courtyards and beautiful flowers planted throughout in regular well kept plots. at one point the game trail we were following disappeared and i asked directions from a nearby curious lady in broken swahili. she responded by sending her daughter scurrying to escort us through the maze of minor service trails and back to the main one.

after descending the peak we continued along the road which offered incredible vistas all the way home. 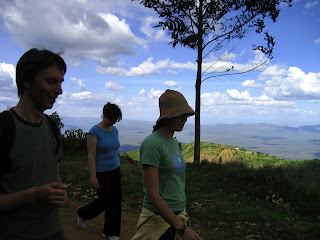 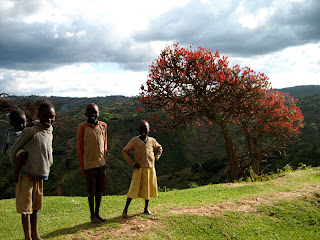 here are some pictures of the local wildlife. we even saw some monkeys up on the ridge! 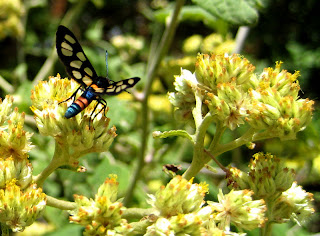 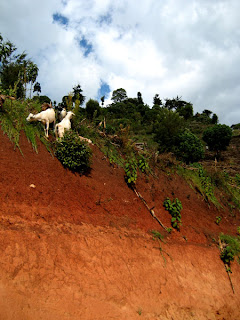 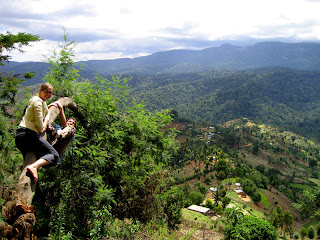 today we said goodbye to josh and kendra, as kendra has a flight out of nairobi tomorrow morning. it was a short visit, but hopefully they will return as they are both working in the sudan for the next year or so. josh has actually started a blog as well to let other's follow his adventures working for SP in the nuba mountains of central sudan. check out his blog for the arc of his journey thus far and then check it again in a few days for his perspective on our little house and lovely ridge walk.
at 1:14 AM

you crazy white boy - I love the picture of you "gesticulating wildly" it looks like you're blessing the land.

Those pictures are fantastic! so colourful!! What a BEAUTIFUL part of the world :)

Aren't people in foreign places grand? I have had a similar experience in Quebec where I was trying to speak French (now i think I could do just fine, but then I was 13) and the lady just answered me in English. I felt pretty sheepish. I am starting to think i should come for a visit. I never thought that Africa could be so green! It sounds like you are having a fantastic time, and I am so glad! Keep the stories coming!

Thanks for all the photos, they're amazing - such a beautiful place you live in! I love the photo of the children and the red tree!

How great it is to get back from our trip and see a posting about our hike on the internet. You've spared me the hard work of going into the details of the hike. Great map. Thanks again for the fabulous weekend.

What a great tour of the part of Kenya you live in. It was good hearing about the people you met and even seeing some pictures of some of them. The scenery pictures also added to the story of your day. It really felt like a guided tour. Thanks for taking us along!
Mum and Dad

Love the pictures- especially the one where Marc's with all the kiddies. So cute. Have you caved and given any sweets?
J :)

Wow - that looked amazing! The scenery is gorgeous and I loved your descriptions - it felt like we got to take a little trip to Africa (I've never been and would love to go someday). Glad to hear things are going well for you guys in Kapsowar.
Karen, Ryan, & Samuel

Beautiful pictures! I love hearing about your experiences.

The pictures of the bug and the goats are my favorites.

Regarding the education level of people...I have been talking to my girlfriends in a taxi about certain subjects...only to find out the taxi driver used to work for the US army and speaks perfect english.yikes.
Heidi